My Accident Story: A Polo, A Flying Biker, Volkswagen Service Station and Repairs!!

"When a Volkswagen visits the service station with an issue, it returns back with two"​
The saying above is quite common and many VW owners even swear by it , in fact somewhere on one of our friendly forums; the Team-BHP also there is one such mention by one of the reputed members (Can't recall the handle but credits in place) which just says it all in one line "Toyota owners Swear by their cars and VW/Skoda owners swear at the service stations"


About the car​
When you buy a VW Polo petrol, what you get is:


What happened?​
Look at the pic posted below, it will very well explain what happened and how: 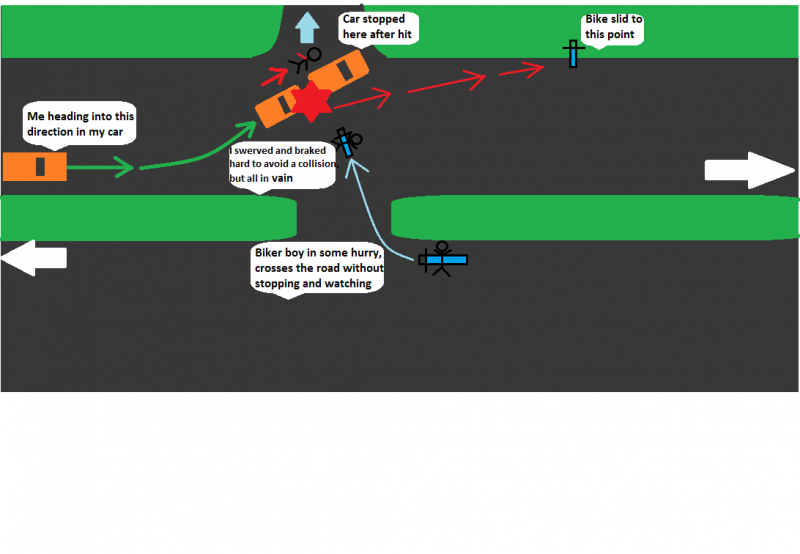 ​
It was on 16th July 2016, 9:30 am and just 0.7 kms away from my home. There was slight rainfall and I was driving at a lazy 60 kph on this well divided 4 lane road. In fact I was just picking up the speed after entering this road from my society when I noticed that a young boy (18?) without a helmet on his head is approaching towards the gap on the median at a very quick pace and he decides to turn!! No indication, no need to check if there is any traffic coming from opposite direction; he just turned and that also at a rapid pace.

Actually I could have avoided the accident if he would have kept riding without applying the brakes but he did the worse part too. As soon as he entered the gap, he applied the brakes a bit and I removed my foot from the brake pedal. And then he started moving again and that also with a heavy throttle.

I swerved hard to left to avoid a collision and he sped even more; boom!! I ended up T-boning the motorcycle.

The aftermath was that the motorcyclist rolled to the roof of my car and fallen off on the mud and grass on the left from above the C pillar and his motorcycle could be seen sliding into the bushes around 15-20 feet away from the car.

I quickly came out of the car with a water bottle in my hand and rushed towards the motorcycle rider who was standing on his feet. What a relief man!! I felt like, Oh God, you just saved me from getting screwed badly, asked him if he was okay and then started shouting at him like “are you blind, you idiot, can’t you see etc.”

Within 5 minutes I left the accident spot and the returned back from just 50 meters, asked the biker if I should take him to hospital (Don’t be worried, I will pay the bill there) which he refused despite of having a fractured left hand I guess. Finally, I left the place.

Damages on my car:

Let the pictures do talking now: 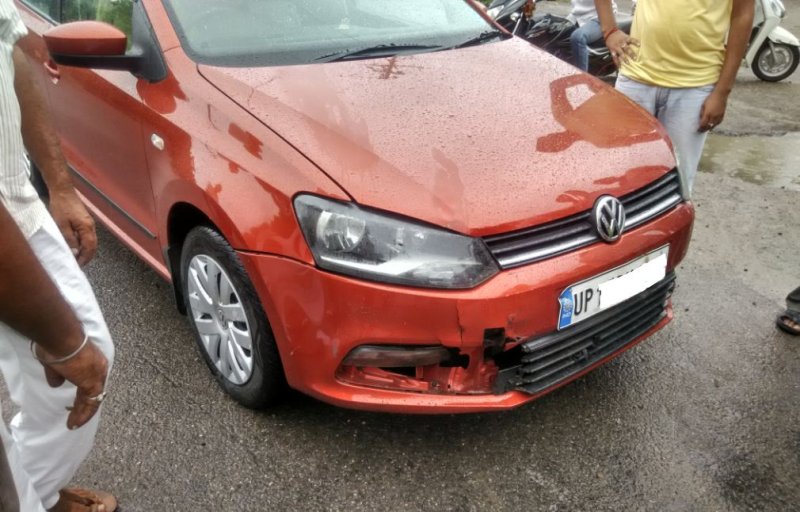 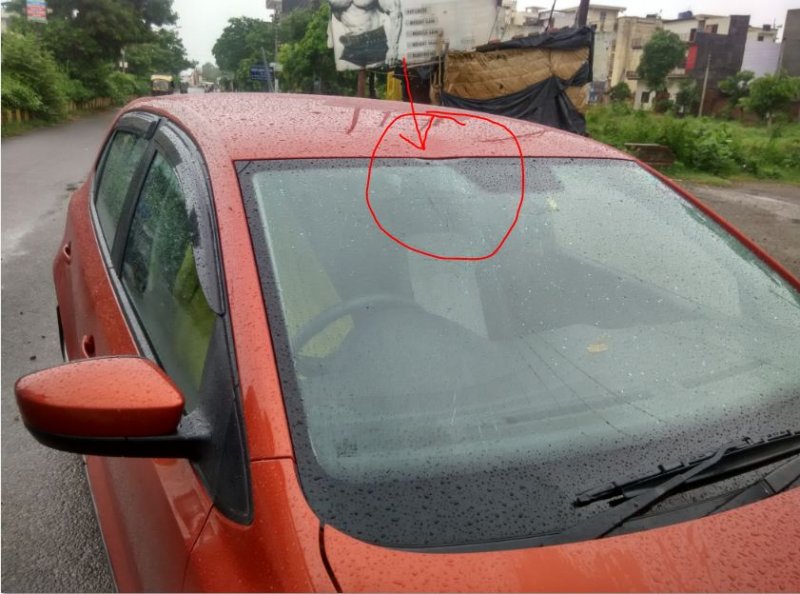 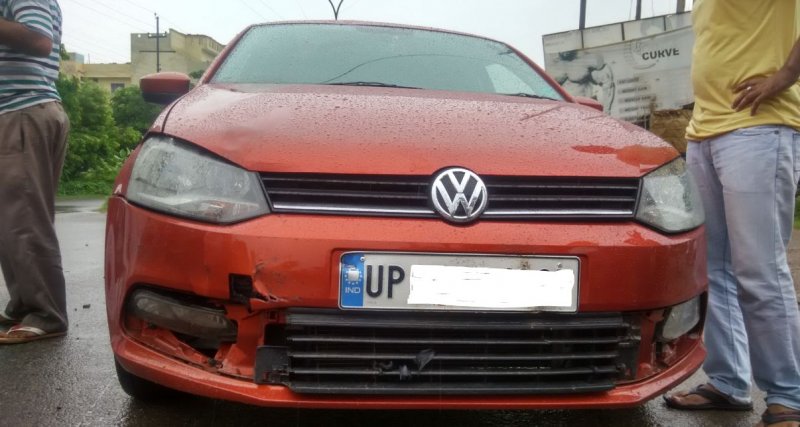 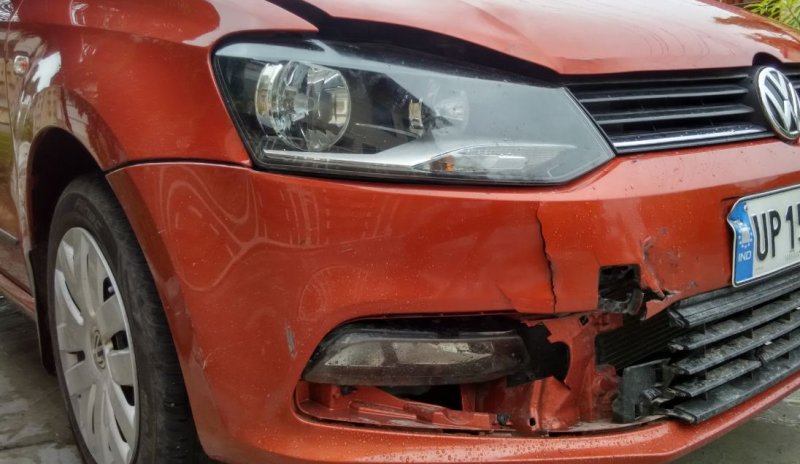 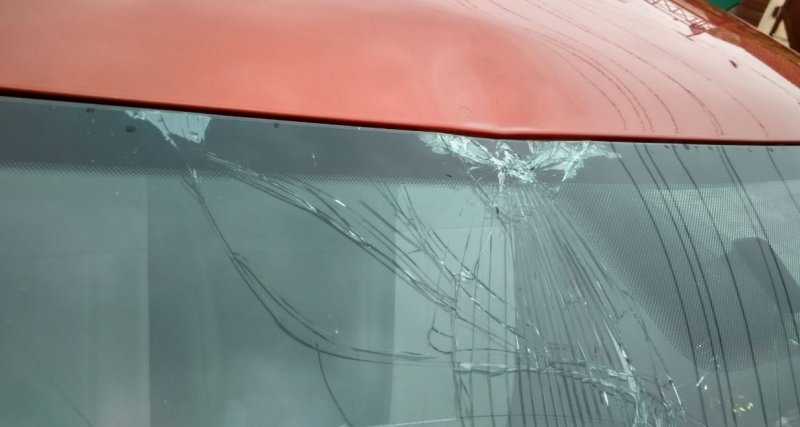 Sorry to hear this vipul. Hopefully insurance will cover all expenses.

Next part of the story and even more interesting; still, let me give a brief summary before we start for our quick readers who must be running out of time but still want to read:

The Story​
After the accident I headed to the place where I had my work (Cool head, maybe the experience of dealing with accidents helped, no panic and I made a compromise at the spot within 2 minutes) and returned back home. This is when I just thought of giving the VW RSA a try, just to check if they actually provide RSA at far places too and that also free of cost? Well, I gave a call and it was Abdul at the other end. He listened to the story and asked me not to drive to the A.S.S. given the fact that its heavily raining and since the cracks were a bit more, so maybe the glass may get shattered under heavy rain. Within an hour; my car was on a flatbed truck and I along with the flatbed left for the service station which is VW Delhi East in Noida, U.P.

I did the formalities and left, by Monday the survey was done, claim was approved and repair work started same day. On wednesday I went to inspect the progress and was happy to note that they were doing it quick. Here are the pictures: 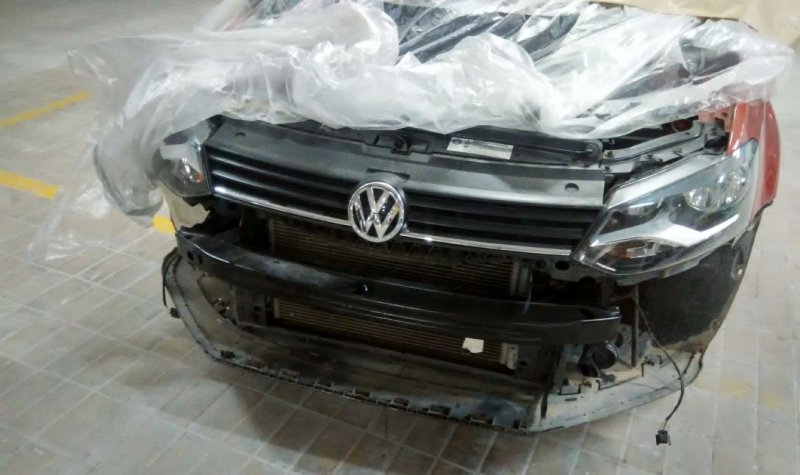 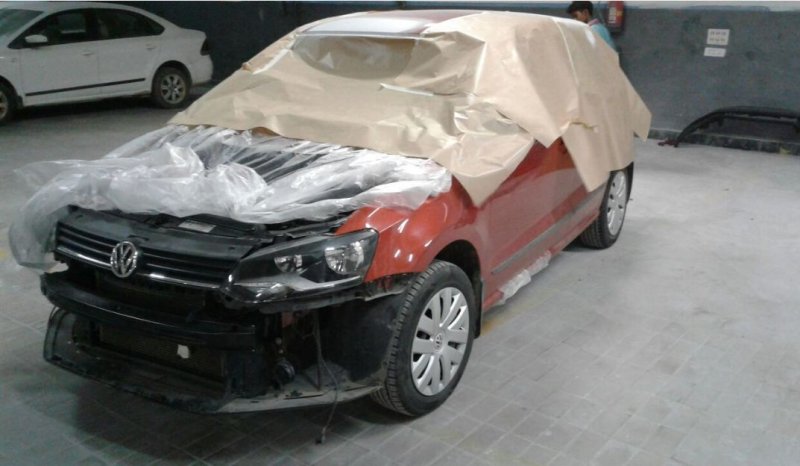 ​
The car was ready by Saturday. So the accident happened on Saturday, repairs initiated by Monday evening and completed by Saturday, they are quick over that.

On Wednesday I reached the dealership just to find out that the car has been ready since Saturday but its bonnet isn't perfectly aligned and entire cleaning remains in and out. I pointed out the deposits of primer and grease in and out and it was all cleaned. I mean it appeared cleaned, now I returned back home and inspected the car two days later (I was out next day) just to find out that there are deposits of primer at: 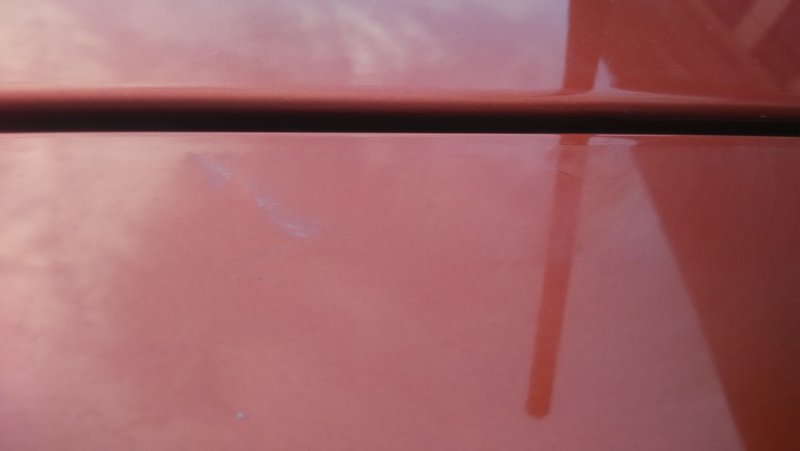 ​
On the roof running parallel to the doors running nearly entire length of the roof just above the doors on the left: 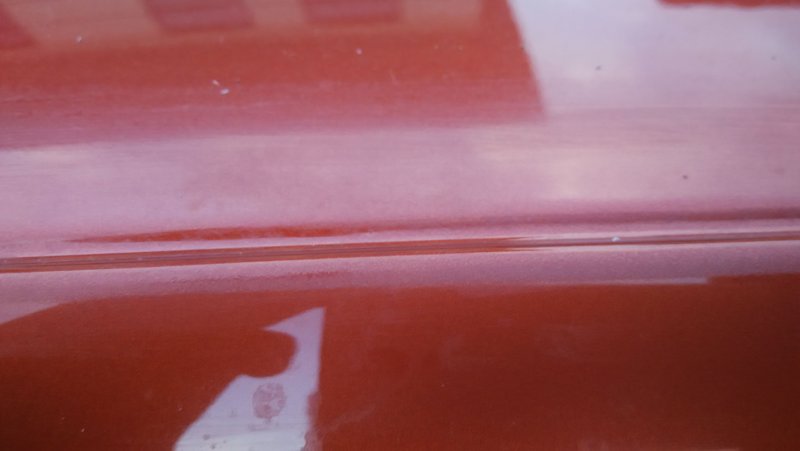 ​
On the roof, around the antenna: 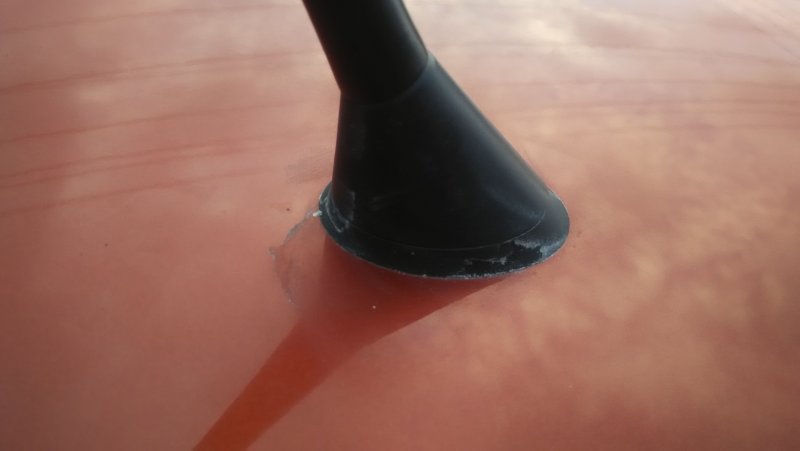 ​
A lot of primer is present in the windshield-roof joint gap: 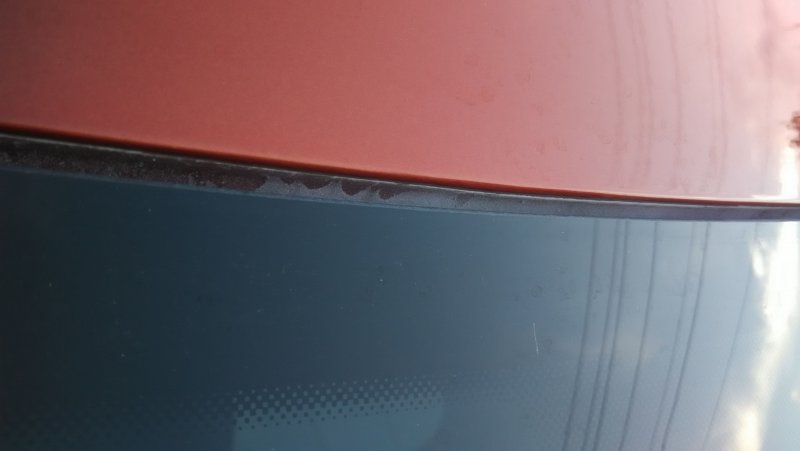 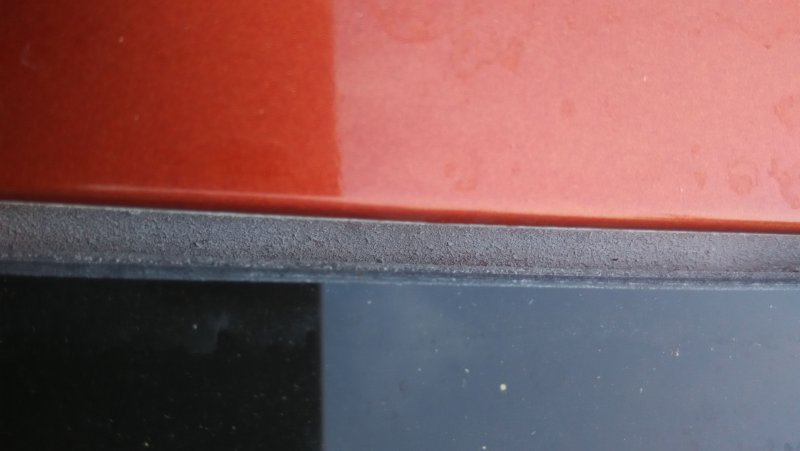 ​
Additionally there is some alien element stuck on the front quarter panel as well as at a small section of C pillar which seems to be impossible to remove: 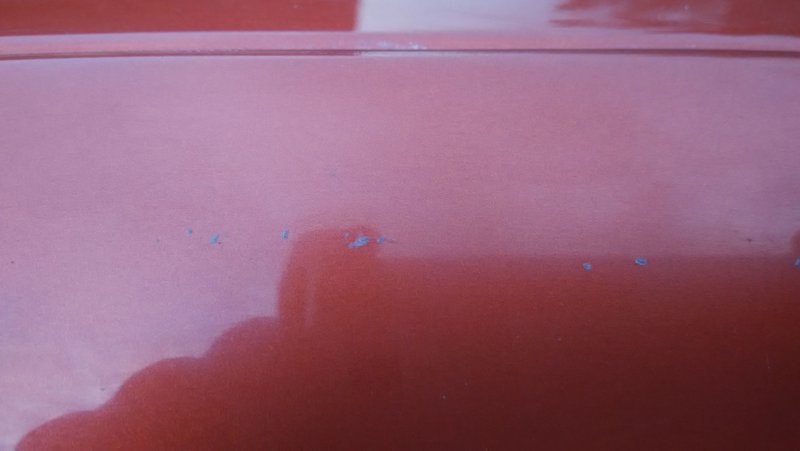 ​
There are the signs of a scratch made and touched up at the place where driver sits on the roof. Poor handling of painted car? 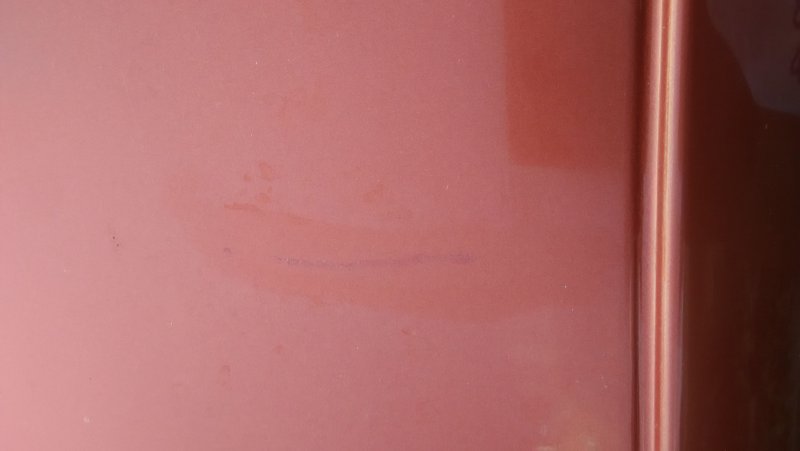 ​
AND MY BIGGEST NIGHTMARE... THE ORANGE PEEL IS THERE IN THE PAINT. I was detailing the car and found that I am no more able to get the mirror finish on the roof because the paint surface is smooth to touch but there are minute irregularities which require either paint correction or maybe complete repaint. 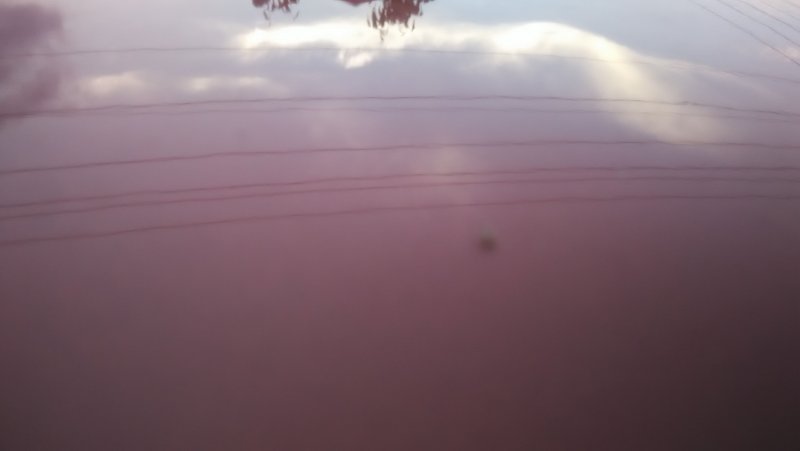 jazzyb5454 said:
Sorry to hear this vipul. Hopefully insurance will cover all expenses.
Click to expand...
Insurance has already done it sir. The bigger concern is in my second post, check above. 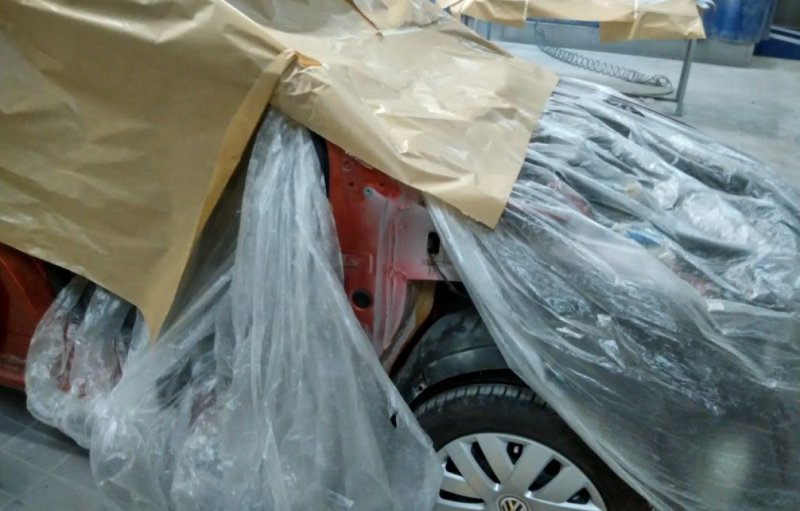 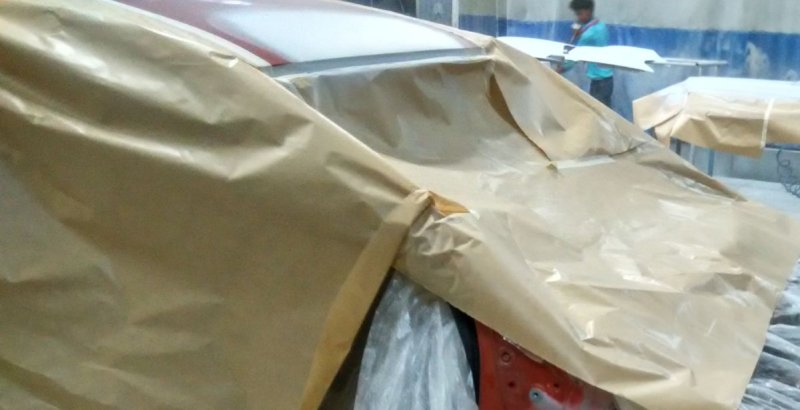 ​
Also compare this picture to the one of orange peel I posted above, I very badly want the paint to be same as above else I won't be able to detail my baby again the same way 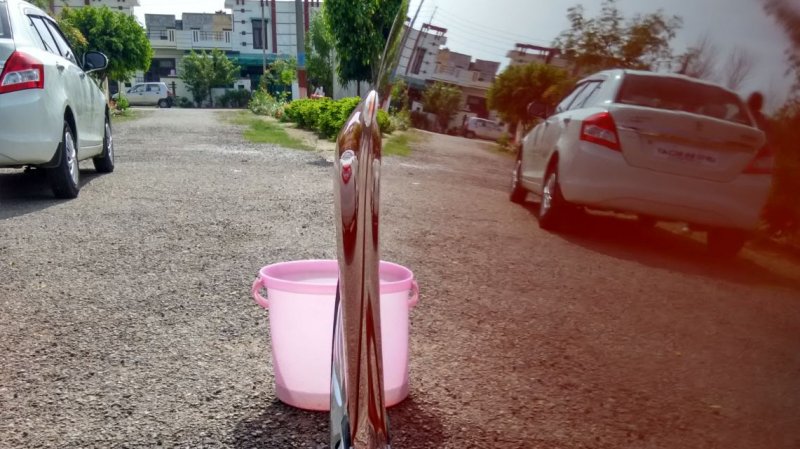 ​
This is a pic with orange peel effect, see there is no sharpness in the reflections:

May i know on how much you paid out of pocket

soap said:
May i know on how much you paid out of pocket
Click to expand...
1700 bucks

woah! That's cheap considering the damage I see in the pics. So, the insurance covered most part of the cost.
Also, this service centre is not a VW service centre right?

soap said:
woah! That's cheap considering the damage I see in the pics. So, the insurance covered most part of the cost.
Also, this service centre is not a VW service centre right?
Click to expand...
The insurance is Bajaj Allianz Zero dep and the service center is the workshop of VW Delhi East.
F

What's with you and Accidents? You are like regular visitor in Accidents thread. Man, either you must drive badly or your driving is bad.

Jokes apart, number of morons driving on road is increasing day by day. So please don't become one in that herd. Please drive carefully and never, ever put blame on a idiot.

Let's come to the topic. Damages looks minimal except the Windshield part. And man, you just paid 1700 bucks from your hand? That's great. Regarding the orange peel effect, you have to live with the consequences of what you did. I hope it reminds you of what will happen if you do this over and over. I don't want to see another accident thread opened by you. If it happened, I will track you and take your car from you. Polo doesn't deserve so many dents bro!

Don't assume there will not be an FIR from the other party. In future always lodge an FIR whenever there are injuries to third parties. And take the number of the other vehicle.

Anyway seeing the narration of your accident, I guess the instinct should be to stop in a straight line at the earliest and avoid swerving in the direction in which the other vehicle is also moving. Difficult I guess, I am not blaming you, it all happens so quickly...
You must log in or register to reply here.