LOL, my first reaction on the last pic was that this car has DRL's alongside the front grill and fog lights below the DRL's, then Where are the headlights??!!!!!
D

THE_DRIFTER said:
LOL, my first reaction on the last pic was that this car has DRL's alongside the front grill and fog lights below the DRL's, then Where are the headlights??!!!!!
Click to expand...
middle one squarish shaped is headlight in my guess and the lower rectangular ones are fog lamps (like kicks ) on top are drls 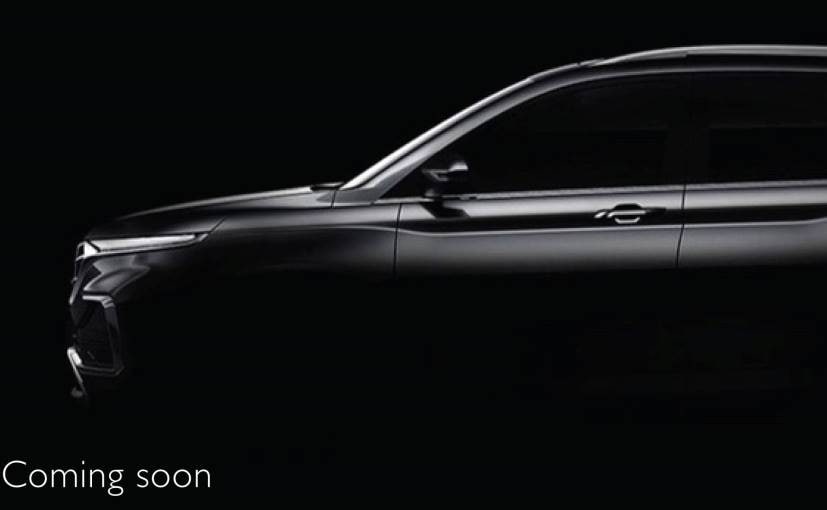 MG Motor will be announcing the name of its highly anticipated SUV for India on January 9. While the SUV has been spotted testing in India on several occasions, not much is known about the upcoming model, and we expect MG Motor India to reveal more than just the name of the new SUV. MG Motor will soon launch its first vehicle in the Indian car market. The British car maker owned the Chinese automobile giant SAIC will launch their first product in the Indian market later this year and it will be officially known as the Hector. It will be a mid-size SUV and would take on the likes of Jeep Compass and upcoming Tata Harrier.

MG Motor India forays in to Punjab with strong footprint
Presence of four dealerships marks region as important market for upcoming HECTOR SUV​
Chandigarh, Jan. 12, 2019:
Click to expand...
As part of its commitment to the Punjab market, British carmaker MG Motor India today showcased its global product line-up in Chandigarh ahead of the launch of its first SUV HECTOR in Q2 2019. MG Motor’s global vehicles are currently on display at Elante Mall till 13th January, enabling prospective customers to witness its global product technology, quality and features.

Marking its presence into “The City Beautiful”, the company has already selected its dealer partner for the region. With an overall plan to operate 100 sales and service touch points nationally ahead of the HECTOR’s launch, MG’s first showroom in Elante Mall, Chandigarh, will be operational by May 2019. As far as the Punjab market is concerned, its showrooms will come up in the cities of Jalandhar, Ludhiana and Amritsar by the same timeframe.

“Chandigarh is among our top target markets and forms a crucial part of our 10-city tour across India where we are displaying MG Motor’s Global Vehicles to demonstrate our product technology, quality & features till February. Through the product showcase, we aim to demonstrate the fundamental product and technological strengths offered by the MG brand globally. In Punjab, which forms nearly 2% of the country’s passenger vehicle market, we aim to be a sizeable player in the premium SUV segment, as spacious SUVs with tall stance are preferred by customers here,” said P Balendran, Executive Director, MG Motor India.

“We are happy to have partnered with Sumit Passi, one of the most prominent dealer partners in the automotive fraternity in the Chandigarh/Punjab region as well as North India. He is known for his vast experience of handling automotive dealerships across many established automotive brands in premium categories. We are confident that under his guidance and leadership, we will be able to establish a strong footing in Chandigarh,” Mr. Balendran added.

MG HECTOR will go in to production in Q2 2019 at the company’s state-of-the-art manufacturing facility in Halol, Gujarat, with an initial capacity of 80,000 units per annum. All vehicles made at the plant will be heavily localized and tailored to suit Indian road conditions and customer preferences as part of the Make-in-India programme. To begin with, HECTOR would have nearly 75% of locally sourced parts.

MG Motor India is also looking to build a future-ready organization that sets the industry benchmarks not only in terms of a young & smart work culture, but also in terms of diversity; female employees already account for 31 percent of the company’s total workforce and it plans to further increase the number of women hires in the future.With a focus on three key pillars – diversity, innovation and safety, MG Motor India is in the process of building a strong base for its future operations ahead of the launch.

Founded in the UK in 1924, Morris Garages vehicles were world famous for their sports cars, roadsters, and cabriolet series. MG vehicles were much sought after by many celebrities, including the British Prime Ministers and even the British Royal Family, for their styling, elegance, and spirited performance. The MG Car Club, set up in 1930 at Abingdon in the UK, has more than a million loyal fans, making it by far one of the world’s largest clubs for a single brand. MG has evolved into a modern, futuristic and innovative brand over the last 94 years. With plans to soon introduce its brand of vehicles in the Indian market, MG Motor India has commenced its manufacturing operations at its car manufacturing plant at Halol in Gujarat.
Click to expand...
Regards

Top 10 Expected Features of MG Hector SUV, To be Priced Under 20 Lakh

First MG showroom in India to be opened by May - Report

MG Motor will have its first showroom in Chandigarh’s popular Elante mall. Jalandhar, Ludhiana and Amritsar will get an outlet by the same timeframe. New Delhi, Jan. 24:
Click to expand...
MG Motor India today announced a strategic tie-up with Myles, the car sharing and car subscription company from Carzonrent. The aim of the partnership is to provide next-generation mobility solutions to customers.

MG Motor and Myles believe that the value of this tie-up will be over Rs. 250 crores in the first phase. This would enable introduction of MG cars with disruptive car ownership solutions in partnership with Myles.

“As part of our commitment to provide innovative and disruptive mobility solutions, we are excited about our strategic tie-up with Myles. This will help to cater to the evolving requirements of the new age customers. The partnership will enable customers to experience our upcoming SUV – MG HECTOR on a subscription basis, book test drives of the car and avail courtesy car benefit through the Myles platform. We plan to extend the Myles subscription model for our second vehicle as well – a pure EV that will be launched by the end of this year,” said Rajeev Chaba, President & Managing Director, MG Motor India.‎

With plans to launch the MG HECTOR in Q2 2019, the partnership will also enable MG Motor India to leverage the existing network of Myles across 21 cities in addition to its own network of 110 sales and service touchpoints at the start of sales.

"As India’s largest B2B mobility solutions provider, Myles has always focussed on simplifying the car ownership experience for customers. Our partnership with MG Motor will enable our customers to experience their first SUV; MG HECTOR and future MG cars through our platform,” said Sakshi Vij, Founder & CEO, Myles. “We believe that the corporate professional today wants greater flexibility in car ownership and our proprietary technology enables this for MNC’s, Indian Corporate houses and SMEs,” Sakshi added.

This strategic tie-up with Myles is part of the ongoing ‘MG Drives Innovation’ initiative. As part of this innovation drive, MG Motor has conducted several programs to identify, encourage and recognise start-ups in the automotive space. MG Motor ran an ‘Auto-Tech Innovation Hunt’ in partnership with TiE and published a white paper on Connected Mobility at their recently concluded Global Summit. The carmaker has also partnered with IIT Delhi to develop technology that will ensure child safety and conducted a hackathon at the institute recently.

MG Motor India is a future-ready organization that is setting industry benchmarks in terms of a young & smart work culture and diversity. Female employees already account for 31 percent of the company’s total workforce and it plans to further increase this in the future. With a focus on three key organizational pillars – INNOVATION, SAFETY and DIVERSITY; MG Motor is building a strong base for its future operations in India.

Founded in the UK in 1924, Morris Garages vehicles were world famous for their sports cars, roadsters, and cabriolet series. MG vehicles were much sought after by many celebrities, including the British Prime Ministers and even the British Royal Family, for their styling, elegance, and spirited performance. The MG Car Club, set up in 1930 at Abingdon in the UK, has more than a million loyal fans, making it by far one of the world’s largest clubs for a single brand. MG has evolved into a modern, futuristic and innovative brand over the last 94 years. With plans to soon introduce its brand of vehicles in the Indian market, MG Motor India has commenced its manufacturing operations at its car manufacturing plant at Halol in Gujarat. The first of these modern MG cars - “HECTOR” will be made available to the Indian customers in the second quarter of this year.

Myles Automotive Technologies is a leading self-drive car rental service provider in India. Myles was launched in 2013 with an objective to develop an alternate ecosystem to car ownership to meet the need of finding an effective solution to the growing congestion problems in urban cities. With a fleet of 39 different car models across 21 Indian cities, Myles cars have covered over a million 'Miles' and have a subscriber base of more than one lakh members. Myles also offers a car subscription model targeted at corporate employees. Myles Automotive Technologies is a wholly-owned subsidiary of Carzonrent India Private Limited, a leader in the personal ground transportation industry in India
Click to expand...
Regards Baojun 510 SUV spied in India for the first time Speaking on the occasion, Rajeev Chaba, President and Managing Director - MG Motor India, said, "India is going to be a key market for the MG brand and the new HQ reflects our long-term commitment to be an integral part of the thriving Indian auto market, in addition to our Halol manufacturing facility, which was inaugurated in September 2017. With a strong foundation and best talent from the industry in our team, we are ready to go full throttle for the Hector SUV, our first launch in Q2 2019." China’s top car manufacturer SAIC who now owns the British iconic brand Morris Garage is all set to enter the Indian car market with their first product MG Hector. MG Hector is likely to be launched in the first half of 2018. Apart from Hector SUV, MG is also planning to launch 3 other models in India over the next two years. SAIC-owned MG Motors is having big plans for its Indian operations. After launching the heavily localized MG Hector SUV (re-engineered version of China-spec Baojun 530) in mid-2019, the automaker will be gearing up to introduce it’s all-electric eZS SUV towards the end of this year. The MG eZS is powered by a 110 kW electric motor which derives electricity from a 45.6 kWh Lithium-ion battery pack. It has a range of 355 km as per NEDC (New European Driving Cycle). The India-spec model could employ the 52.5 kWh battery pack that is available in some SAIC products. The range is estimated to be over 400 km. MG Motors, which is one of the oldest brands in the UK will soon launch its first vehicle in the Indian market. To take on the models like Jeep Compass in the Indian market, the first launch from the brand will be the MG Hector, which is expected to be launched in the coming months. With electric cars showing signs of being the future of the mobility, MG Motor will bring in an electric SUV as their second offering in the Indian market. The MG eZS electric vehicle, the second car from the manufacturer will be the second offering from the brand and the electrified SUV was showcased at the Bangkok International Motor Show (BIMS).