This is what Mahindra 2 Wheelers is displaying on their 2 Wheeler Pavilion at Auto Expo 2012. For the first time I saw Mojo in flesh. And it doesn't appears as weird as it does in images. 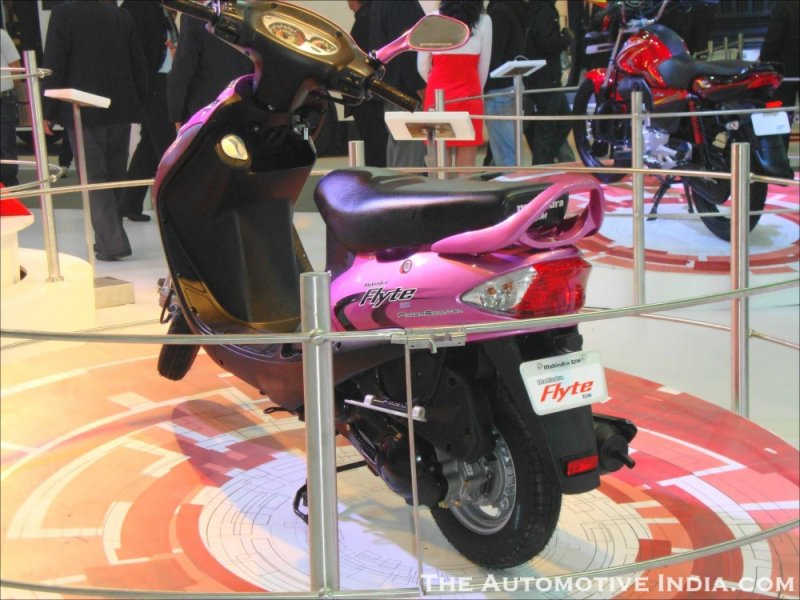 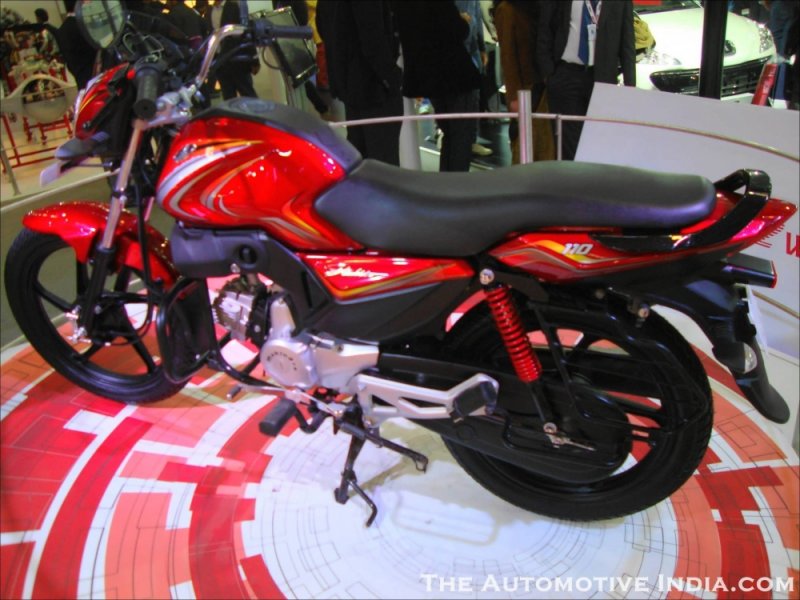 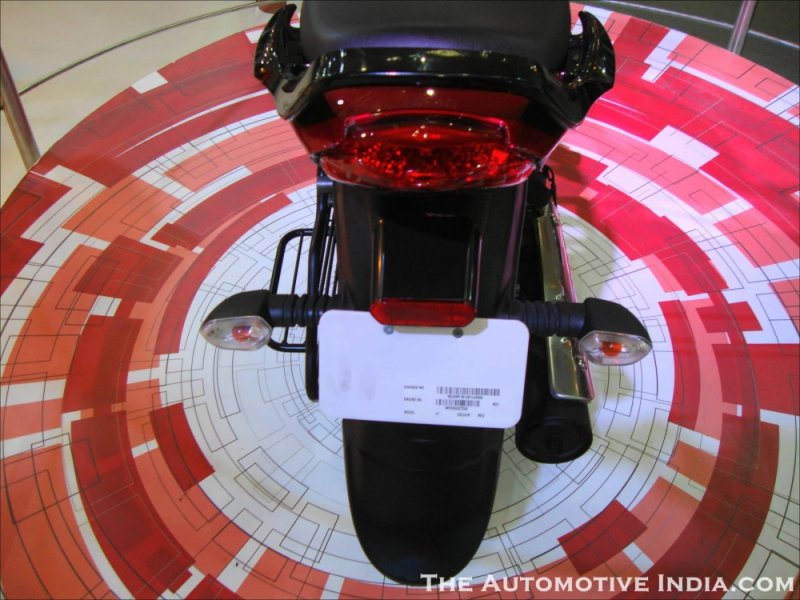 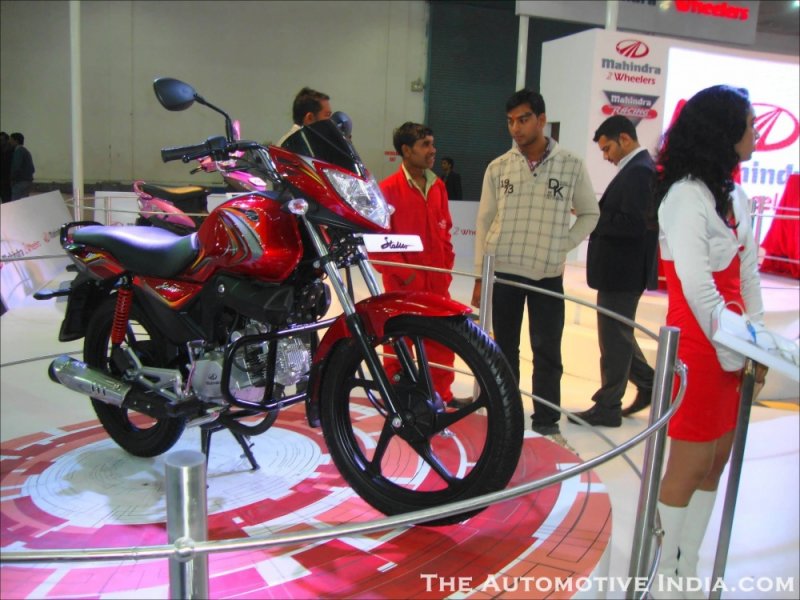 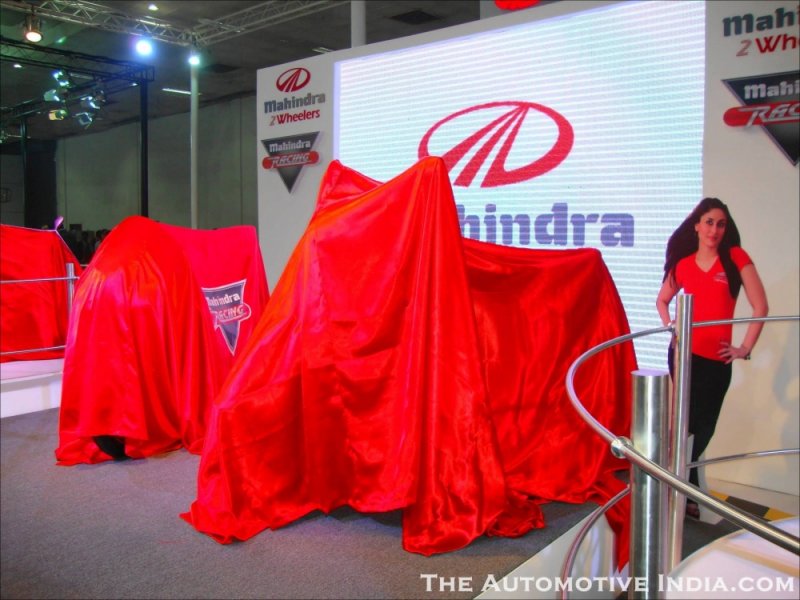 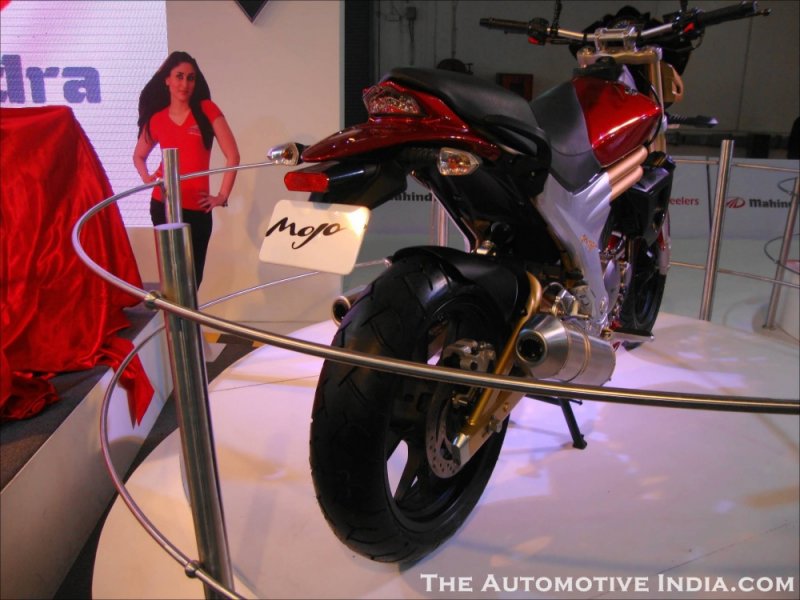 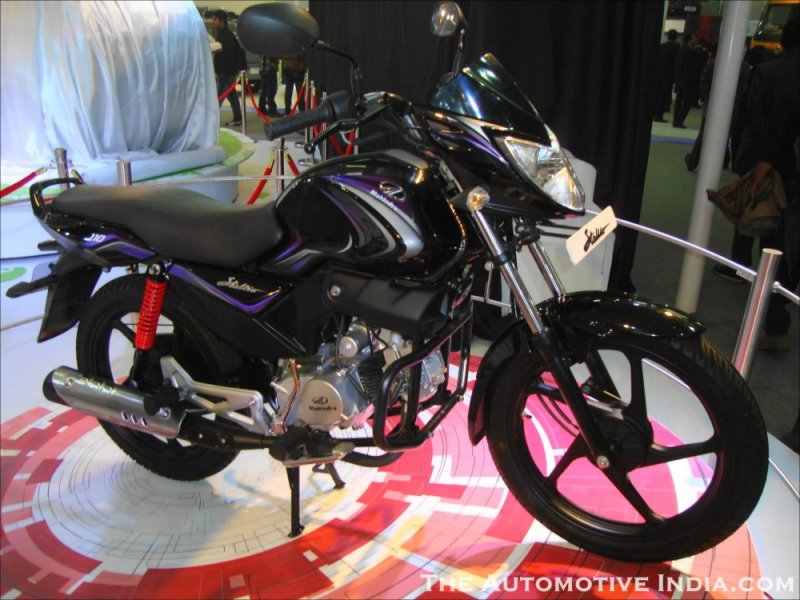 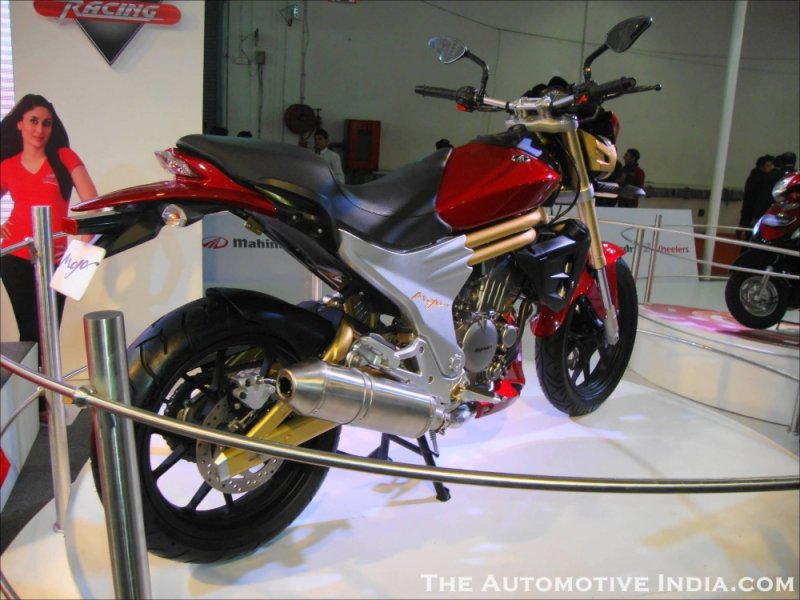 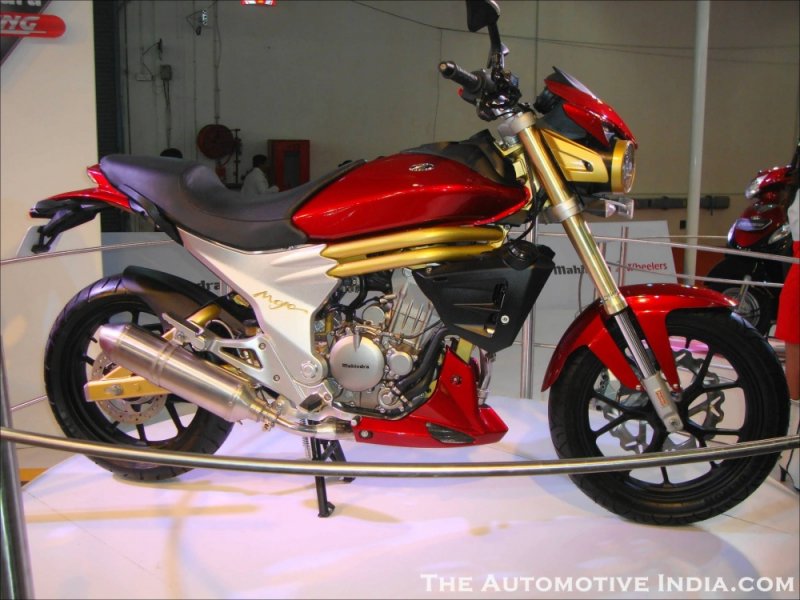 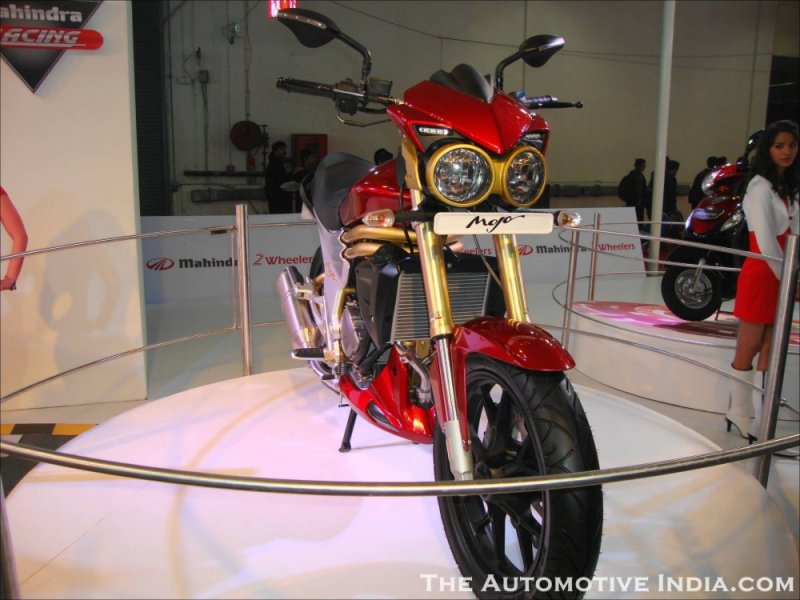 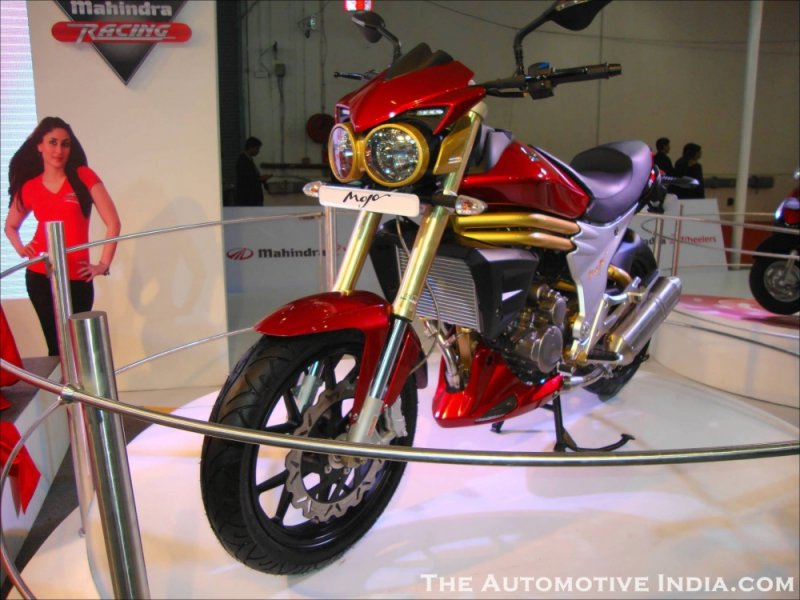 The MOJO is very different in design as compare to the present generation Indian bikes,but its not a bad one.Surely it will turn lots of eyes towards it.Specially liked the gold platted color work on the bike.
S

If Mahindra can sell the Mojo for around 1.5 lakhs (highly improbable), only then it might do well. Price it above Rs 2 lakh and be prepared for another major dud.

mojo looks like a thin boy with fat specs! what was there under cover at mahindra racing?
S

Umang said:
mojo looks like a thin boy with fat specs! what was there under cover at mahindra racing?
Click to expand...
The left one is surely the Mahindra Racing sports bike that they have displayed earlier at many events. Any guesses for what is to the right?
S

Got both. The left one is the MPG3O- a fully faired racing bike and the right one is the Duro DZ.

M&M 2Wheelers to flex its muscle

Two wheeler industry is a very competitive industry in our country there is absolutely no margin for error and brand really matters.
When M&M acquired Kinetic motor's the whole industry had lots of hope on Mahindra to turn the company around, after a modest start with couple of scooters the brand started wading. there commuter bike was launched in great style but it also vanished in similar style.
Now M&M wants to make a mark in this space, they are building their own R&D and also investing 500 crores, it will be very interesting to see what kind of changes this will bring.

Only Time will tell

M&M to step up efforts to capture two-wheeler market, to infuse Rs 500 crore - The Economic Times

Mahindra will launch its 292cc,single cylinder, liquid cooled Mojo in early 2014.The bike is expected to be price at 1.75 lakh rupees(ex showroom).

droy said:
Mahindra will launch its 292cc,single cylinder, liquid cooled Mojo in early 2014.The bike is expected to be price at 1.75 lakh rupees(ex showroom).
Click to expand...
I hope they tweak the designs of the bike, i find the design to be too gawky

The company, which made its entry into the popular 100cc motorcycle segment with 'Stallio', would soon introduce its upgraded version along with premium 300cc motorcycle 'Mojo'.

"We have stopped production of Stallio. We will be making announcements about the newer version of Stallio very soon," he said, adding that the company was currently testing its 300 cc superbike 'Mojo'. "There have been so many queries about Mojo. We have been consistently getting it from South, particularly from Chennai. It will be coming soon. It is undergoing some tests now," he said.

Stating that the company is "evaluating various options to launch new products," Popli said the three motorcycles planned for launch would be across "various segments", but declined to elaborate, saying, "you have to wait and watch" till launch. The company which focused on urban markets with its scooters, is also working on targeting rural markets, he said.

"Rural segment, those are the areas we are working on. There will be a product for the segment. We have looked at the moped segment as well (for launching a product in that segment," he said.

On plans for this year, he said "with the introduction of three motorcycles, we will have five products, including two scooterettes". Popli was here to unveil the company's second scooterette Mahindra Rodeo RZ 125 cc.

The company which tied up with Taiwan-headquartered SYM for supply of engines for its scooter range would also make an announcement of manufacturing engines soon. "We will be making announcements on that soon," he said but did not elaborate.

Mahindra tied up with SYM for supply of engines to its scooterettes which it manufactures from their Pithampur facility near Indore. The plant has a total capacity to produce a million units every year, he added

Mahindra 2 Wheelers - the most confused company in terms of its product mix and marketing. Seriously, did they think the Duro would sell by makin a few cosmetic changes? And when was the last time one saw a Rodeo or Flyte on the road? The joke doing the blocks is that Aamir Khan's asking price has gone down after the failure of the Stallio!

I just hope they don't waste those 500 crores.
You must log in or register to reply here.