Today in BIC there was a practise session , to understand the track on day one.
Day 1:
At each Grand Prix meeting all race drivers may participate in two one and a half-hour practice sessions on Friday , a one-hour session afternoon. While individual practice sessions are not compulsory, a driver must take part in at least one Saturday session to be eligible for the race.

One-hour qualifying session is split into three distinct parts, each with multiple drivers on track simultaneously, and each with the drivers running as many laps as they want:

Q1: All 26 cars may run laps at any time during the first 20 minutes of the hour. At the end of the first 20 minutes, the eight slowest cars drop out and fill the final eight grid places. However, any driver whose best Q1 lap time exceeds 107 percent of the fastest time set during that session will not be allowed to take part in the race.

(Under exceptional circumstances, which could include setting a suitable lap time in a practice session, the stewards may allow the driver to start the race. Should there be more than one driver accepted in this manner, the grid order will be determined by the stewards.)

Q2: After a seven-minute break, the times will be reset and the 18 remaining cars then will then run in a 15-minute session - again they may complete as many laps as they want at any time during that period. At the end of the 15 minutes, the eight slowest cars drop out and fill places 11 to 18 on the grid.

Q3: After a further eight-minute break, the times are reset and a final 10-minute session will feature a shootout between the remaining 10 cars to decide pole position and the starting order for the top 10 grid places. Again, these cars may run as many laps as they wish.

If a driver is deemed by the stewards to have stopped unnecessarily on the circuit or impeded another driver during qualifying, his times may be cancelled.

I was just reading through this interesting article on HT. Here's some food for the thought: Great for F1, not for India's drivers - Hindustan Times

The successful staging of a Formula One Grand Prix may have raised the profile of the country. However, the presence of an F1 track in the country has done nothing to raise the profile of who should ideally have been the main beneficiaries - India's up-and-coming motorsport talent. The final round of the National Racing Championship (JK-NRC) and its support event, the Vokswagen Polo-R Cup, in addition to the JK Racing Asia Series (JKRAS), a support race in last month's F1 GP, were slated to be held at the Buddh International Circuit (BIC) in the final weekend of November. However, the NRC has now been shifted to the Irungattukottai Race Track, at Sriperumbudur near Chennai, after the circuit's owners Jaypee Sports Limited (JPSI) decided to close the track for 'maintenance'. The Federation of Motorsports Clubs of India (FMSCI) has conveyed the news to the flabbergasted series promoters. FMSCI president Vicky Chandhok said, "The circuit owners have decided to upgrade certain facilities at the track and it will be shut till March."

A source close to the FMSCI said, "Vicky Chandhok, in addition to being the FMSCI president, is also a consultant with the BIC. Didn't he know that the circuit was going to be renovated before ratifying the calendar?" JPSI's vice-president for corporate communications, Askari Zaidi, confirmed that the circuit will be closed for renovations, mostly external landscaping around the venue, and not for much work in the circuit per se. Volkswagen-India's motorsport head Prithviraj Siddappa said the FMSCI must get its act together, especially as there is talk of international auto majors (Toyota and Audi) looking to enter the Indian motorsport scene. "The whole episode smacks of official apathy. The FMSCI must work more efficiently to promote motorsport in the country." The real losers will be the drivers and the promoters of the series - JK Tyres. After the last round of the JK Racing Asia Series, the cars of all the drivers were not transferred as the next round was going to be held here. Now they will have to pay extra to get the cars transported to another venue. JK motorsport head Sanjay Sharma expressed his displeasure over the move. "It's disappointing for the drivers, but life still goes on," he said. India may have an F1 circuit, but with management like this that's hardly a boon for India's motorsport aspirants.
Click to expand...
Drive Safe,
350Z

India's new Buddh circuit won in the best circuit category, while Red Bull's title-winning RB7 took the plaudit for car of the year. The winners were decided by a judging panel including figures such as Gary Anderson, Michael Andretti and Pascal Vasselon, and announced during a ceremony in Cologne.
Click to expand...
source - msn.com

Jaypee Sports International Limited, the promoter of Buddh International Circuit, has acquired exclusive TV rights from Infront Sports & Media, the promoter and organizer of the FIM Superbike World Championship, for the live transmission of the Indian round of the championship to be held in March 2013. The deal licenses JPSI to resell the TV rights of the main race along with the support races to the Indian broadcasters.
The four-year contract, which covers the Indian Territory and goes into effect till 2016, will also permit JPSI to resell the non-exclusive TV rights to the broadcasters for other non-India WSBK races. Commenting on the development, Sameer Gaur, MD & CEO, JPSI, said: “We are delighted with the deal as this will help generate additional revenue apart from sponsorships. Post the F1 Indian GP, the popularity of motorsport has increased many folds in India and with WSBK also coming to BIC early next year, it is going to increase further.”

Paolo Flammini, CEO of Infront Motor Sports, said: "We are pleased that such a prestigious partner as Jaypee Sports International, which has committed itself to the organization of the Indian Round of the Superbike World Championship from 2013 to 2016, is also directly involved in the administration of the television rights of the championship throughout India. We are certain that this collaboration will bring about a major increase in awareness for World Superbike." World Superbike is slated to make its Indian debut at the Buddh International Circuit on 9th-10th March next year.

For all those of you who dream about getting a chance to watch an F1 GP live, here’s a chance, and more! Bharti Airtel have announced a contest named ‘Join our pit crew’. The contest gives one lucky Formula One fan and a friend the opportunity of a lifetime to spend three days with the pit crew of Mercedes AMG Petronas drivers Michael Schumacher & Nico Rosberg.

To participate in the ‘Join our pit crew’ contest, fans have to visit facebook.com/airtelf1 Following this, one can participate in the contest and find a spot for themselves on the leader board which will maintain scores of all contestants. The final winner of ‘Join our pit crew’ contest will be selected from the top 20 contestants as per the leader board.

Aside from the main pit crew contest winner, the other lucky winners of this contest will also meet MERCEDES AMG PETRONAS team driver Nico Rosberg. Additionally, other participants in this contest also stand a chance to win picnic stand tickets & exclusive T-shirts designed by Shantanu & Nikhil..

The second and 2012 leg of Formula One Airtel Indian Grand Prix will be held on Sunday, 28th October this year.

The countdown to second Indian GP has begun. Just a preview of what’s all in store apart from the race. 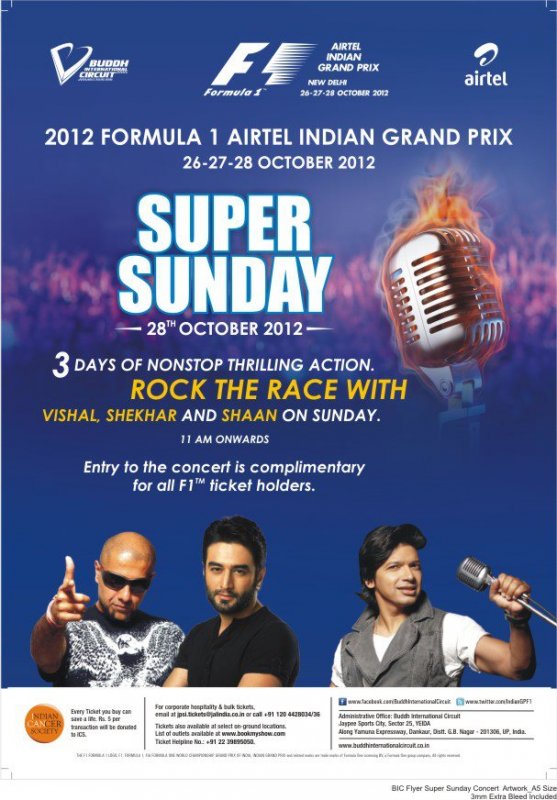 Indian GP organisers have announced the sale of single day tickets for the 2012 Indian Grand Prix scheduled at the Buddh International Circuit on October 26-28.

While a season ticket (three-day) for the main grandstand overlooking the pits and grid costs Rs 21,000, race day ticket will cost Rs 12,000.

Similarly, the prices for all spectator stands have been reduced for those interested in race-day viewing only.

The cheapest option to enjoy the sights and sounds of Formula 1 are the two natural stands located at turns 1-2, and 8-9 respectively. While a three-day option costs an already reasonable Rs 3000, race-day tickets are cheaper still, costing just Rs 2000 .

In a bid to ease parking woes, spectators will now be able to buy one parking slot per ticket, instead of two tickets for one slot.

The only thing which they will have to do is to just download the Airtel India Grand Prix free mobile application from the Google Play Store and iTunes Application Store. The downloading will not cost any kind of charges. As soon as the application gets installed in the mobile phones, the F1 fans will stay tuned with the all the latest actions of the Racing Events every day. This will include race results, standing, schedule and latest news. Also it provides with the information of the last race – position, driver, timings.

Since the Airtel Grand Prix 2012 application is loaded with unique content and has handy tabs, it makes the interface extremely user friendly. To maintain the enthusiasm and the excitement among the fans, Airtel will also allow its application users to take part in the quizzes to win prizes. The application will also allow its users to read all the amusing details related to the events and latest buzz directly from the Airtel regarding all of its initiatives taken as the host of the Grand Prix event.

The Airtel India Grand Prix is scheduled to take place at the Budh International Circuit (BIC), Greater Noida on October 26th – October 28th which shall be hosted by Airtel. Airtel is currently operating in 20 countries across Asia and Africa.

The action begins from today onwards. Who’s attending the Indian GP this time?

All set for the race? 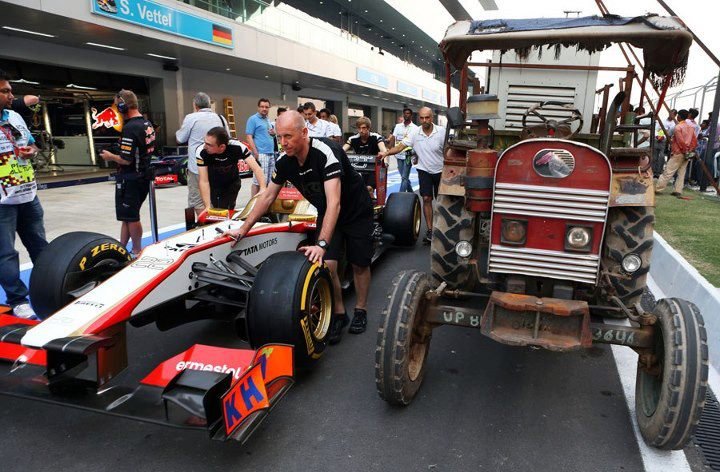 I am a lifelong Ferrari fan, but I think they deserve to be booed by all for putting up the Italian Navy Flag on the cars.

Can one of our paan experts not fire onto the flag?!!

Only I hear that blood money has been paid and accepted.

A few fresh pictures from BIC Facebook Page. This time the area around souvenir shops is paved. I’m expecting less dust than earlier. 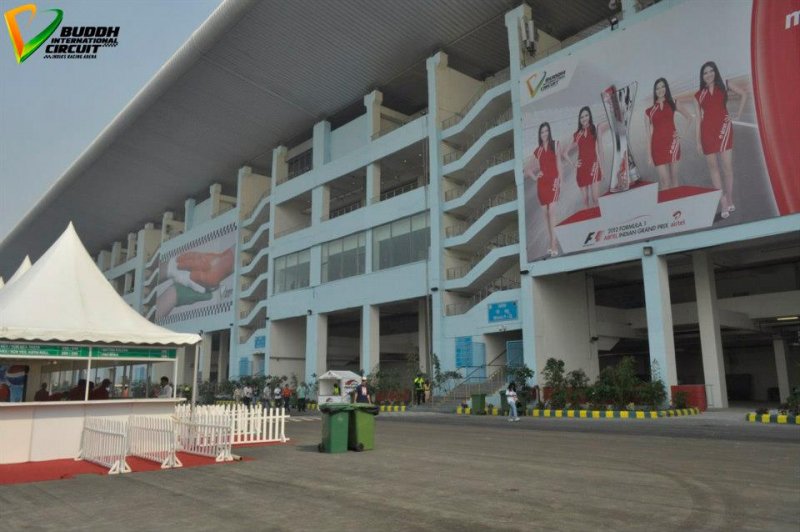 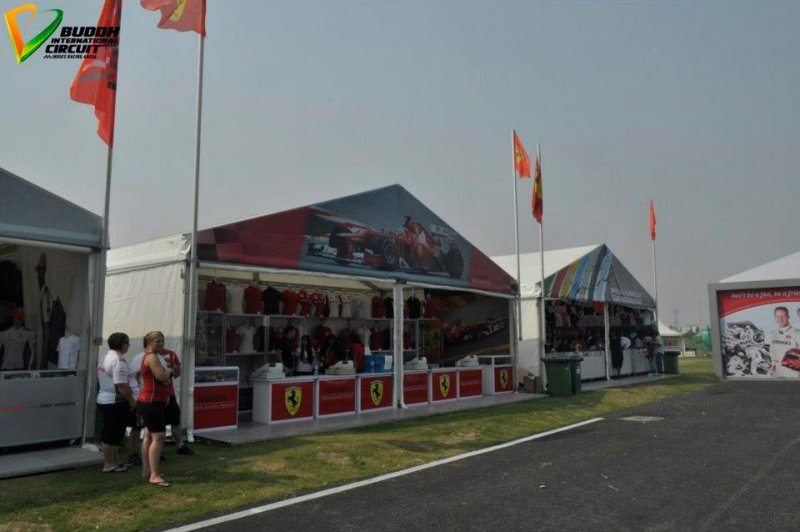 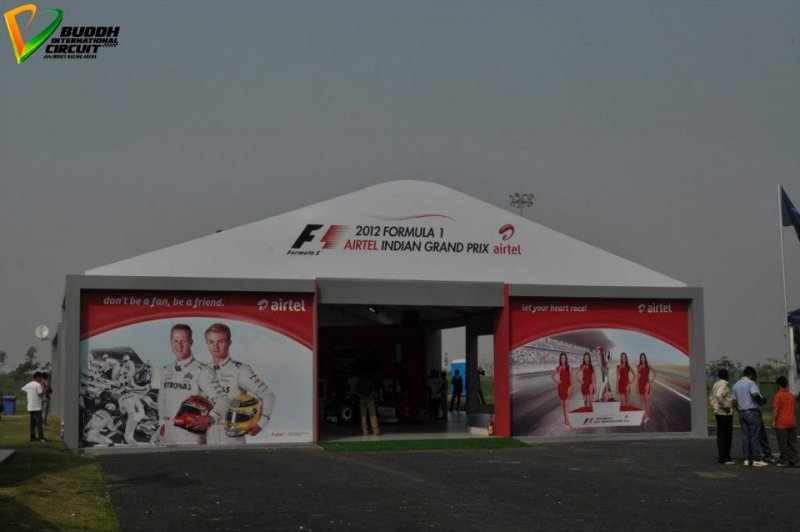 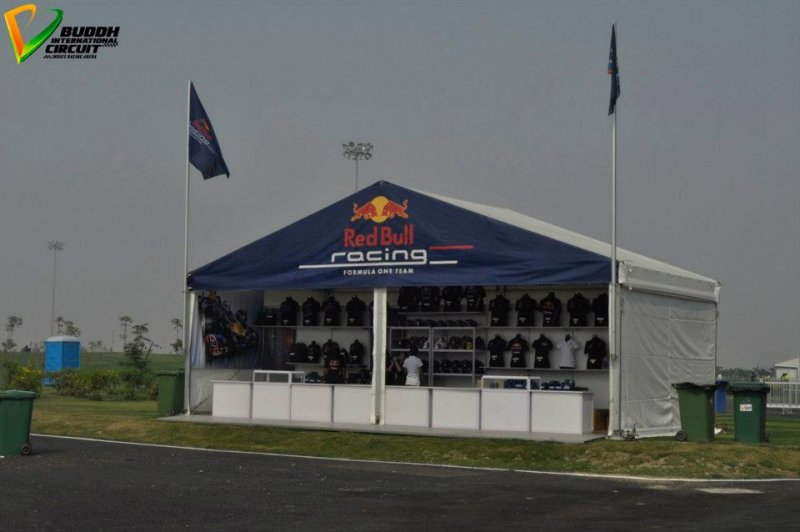 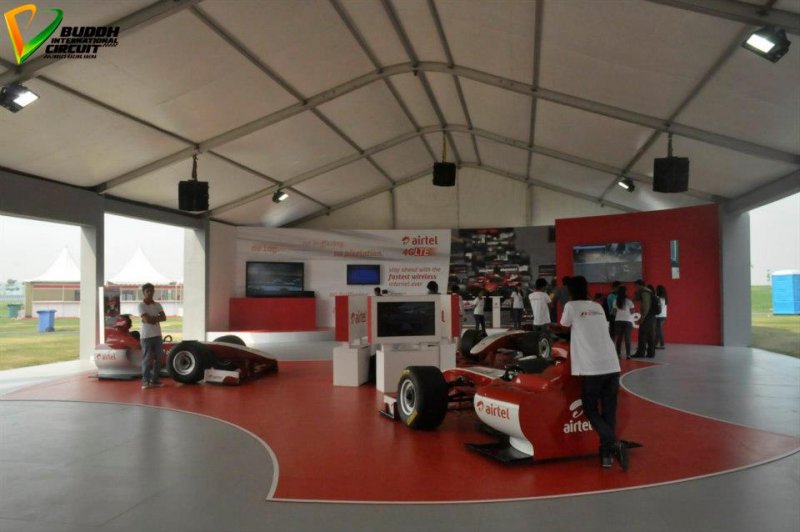 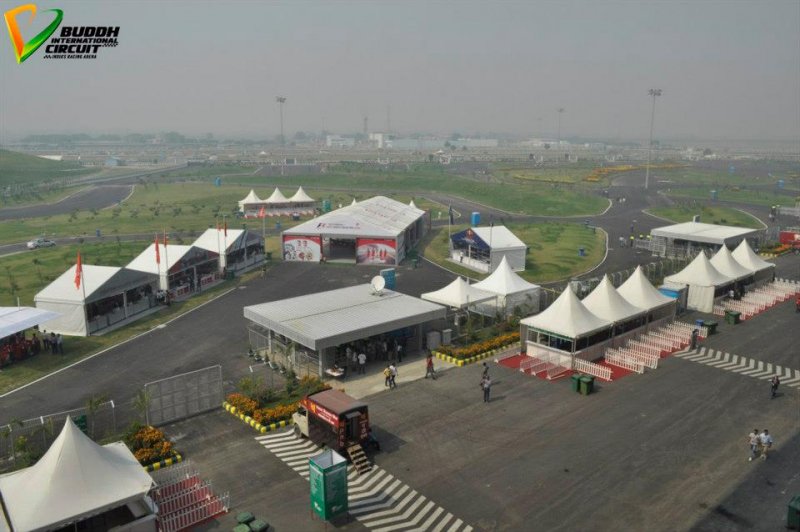 Very rightly said. I too had been a great fan of them and i now feel very bad for their action. It is not a good.

I also feel this would be a race of the Sauber and expecting a podium from perez or kobiyashi.

But want schumi also to be in a podium :)

The 2012 Indian F1 GP trophy now has been unveiled. 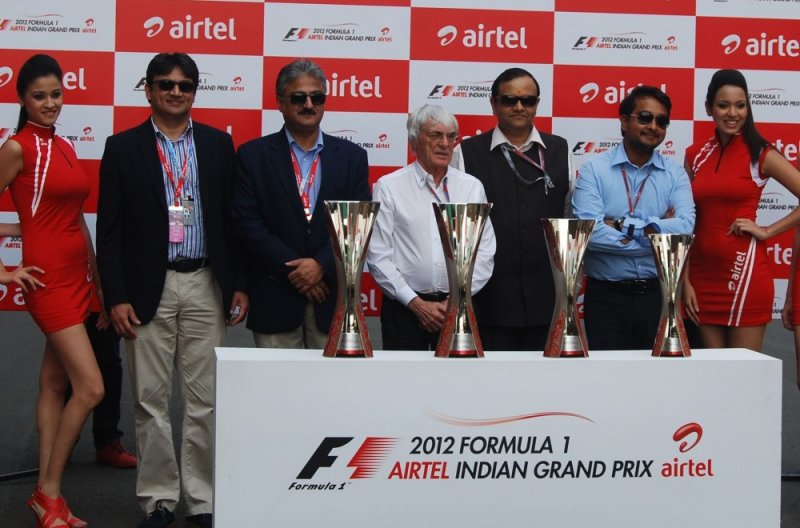