Hello TAI, I have got a new bike on Last Thursday, it is Honda's CB Shine SP self drum version , black with red graphics.

Last month i moved to Hyderabad and was looking for a used bike which me and my brother could use.I wanted a combination of power, comfort and mileage so started searching for Hero Glamour and Honda shine in used bikes market. I didn't want to buy very old models bikes so was considering less than 5 years old bikes.

My max budget was 30000 but in this price range 2012-13 models were available and they had clocked 70k-1 lakh kilometres. I was not convinced buying those bikes. I found a shine 2012 model it had clocked 19k km but owner quoted price of 35000. I was ready to take it for 30k but he was adamant so deal was not finalized.

I went to my hometown last Thursday evening and I was in for a surprise, my brother called me and said let's buy a new bike, why look for second hand bike. He then talked to dad and he also agreed. Then we went to Elan Honda dealer in Mahabubnagar and paid down payment, and delivery was made then only.

Extra accessories like seat cover , tank cover, and crash guard were given free of cost. The guy at showroom put 500ml of petrol and started the bike and revved hard, almost redlining the engine. I asked him to stop it but he was like nothing will happen.

Bike was washed and taken out, it was 8:30pm by that time and we went to nearby petrol pump and got the Tank Full. It consumed 12 litres of petrol. I wanted to take it to Hyderabad but since TR number/ insurance papers were not given, I decided to get it registered next weekend. Haven't taken photos because I returned by Sunday so it will be updated once i visit my home town.

More details will be posted soon, can anyone suggest some Run in period tips?
K

Happy and SAfe Miles Salahuddin with your new SP. I believe the bike must be a VFM one for you. Keep updating on the mileage, performance and maintanences.

Where are the pictures man??
No food with out salad.
No thread with out pictures.
S

I have the pictures, need to compress them and will upload very soon. Did a 100km trip from Mahabubnagar- Hyderabad today.

Congratulations Salahuddin.. Nice decision to go for new bike as two wheeler meters are always tempered and bikes tend to adopt to the driving style of first owner.

Now its your's horse.. Tame it.. wish you many more miles on your new possession .. 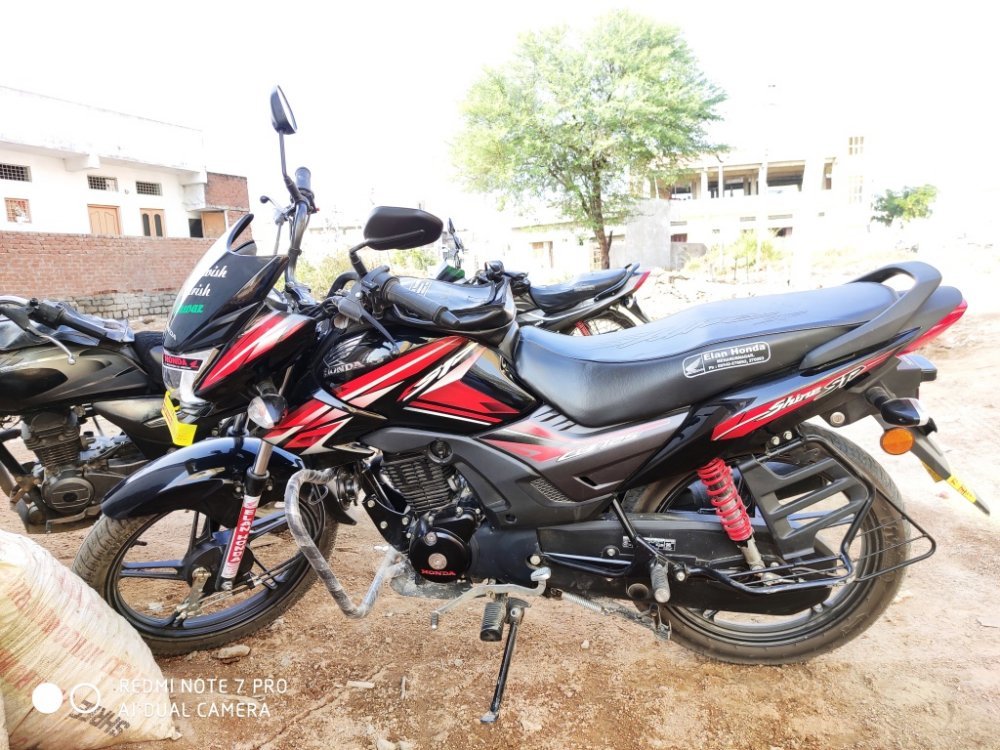 Here is the first pic of my bike ,it looks very eye catching in this color combination Black+Red graphics. Paint quality is very good but some parts have poor paint quality, Ex:- The ladies footrest paint came off in just two days. Otherwise plastics are durable. 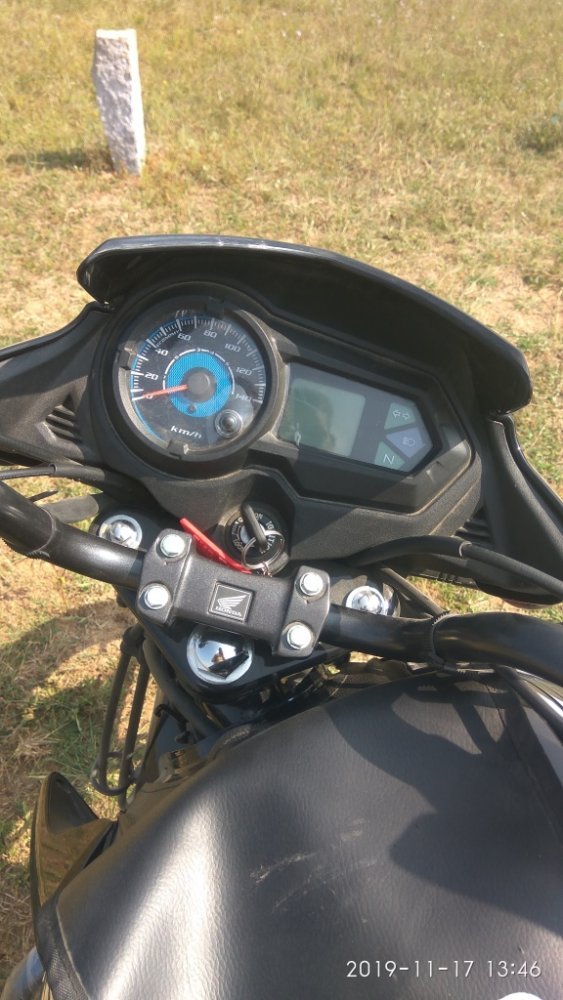 The instrument console looks beautiful in night. It has white backlight with red needle and looks very premium. The analogue meter displays speed and digital part shows Time, Odometer, Trip meter, Fuel bars and service due indicator.
Addition of clock is a welcome feature as most of the time while riding you can not take your mobile and see time. Also it helps to know if you are getting late or not.
The right portion shows Neutral light, Turn Indicators and high beam.
The switches quality is also good. You get push button to switch from Low to High beam and also get a pass light switch.
It misses out on kill switch which is available in new BS-6 model.

Engine and Exhaust have black paint. Grab rail gets matte finish with texture which makes it east to hold. Matte paint wont come off that easy compared to Metallic paint.
Seat is long and two people can sit comfortably. The cushioning could be more but it is comfortable overall. 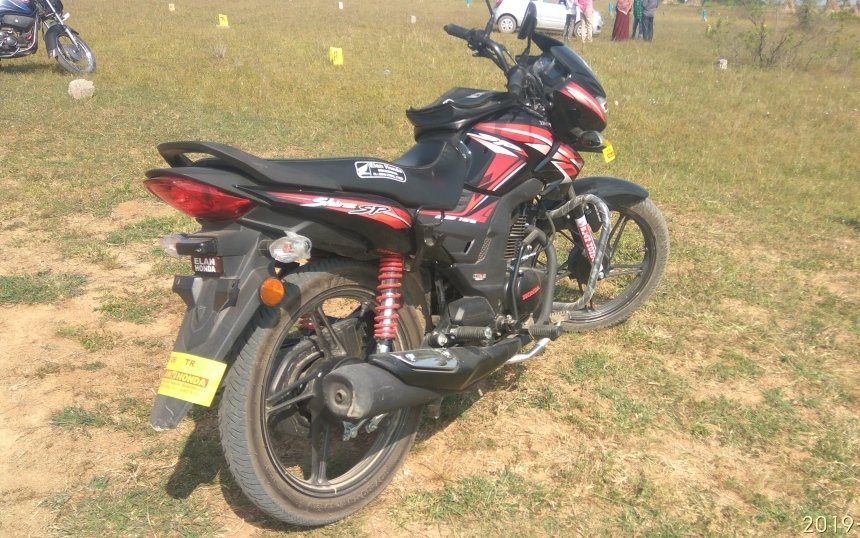 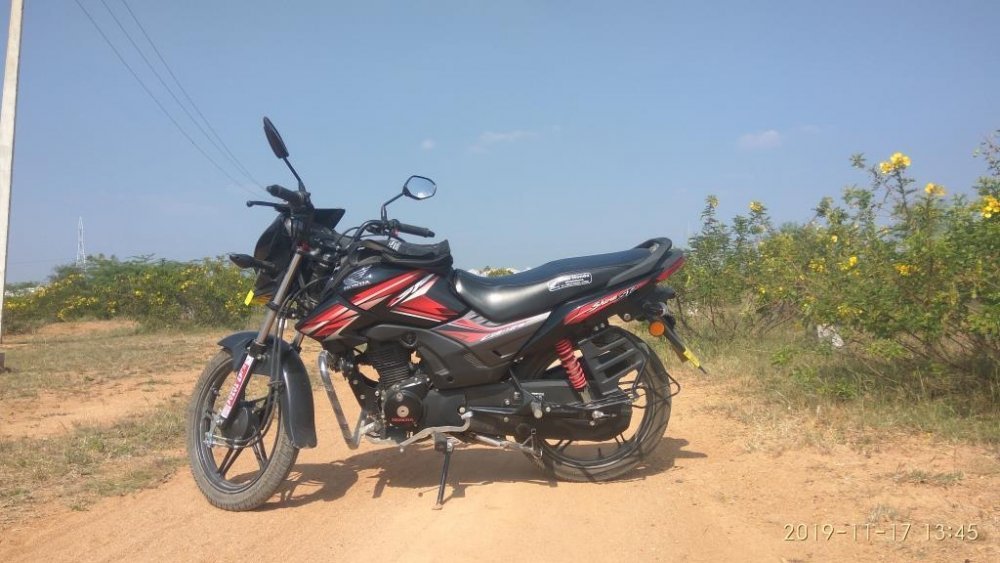 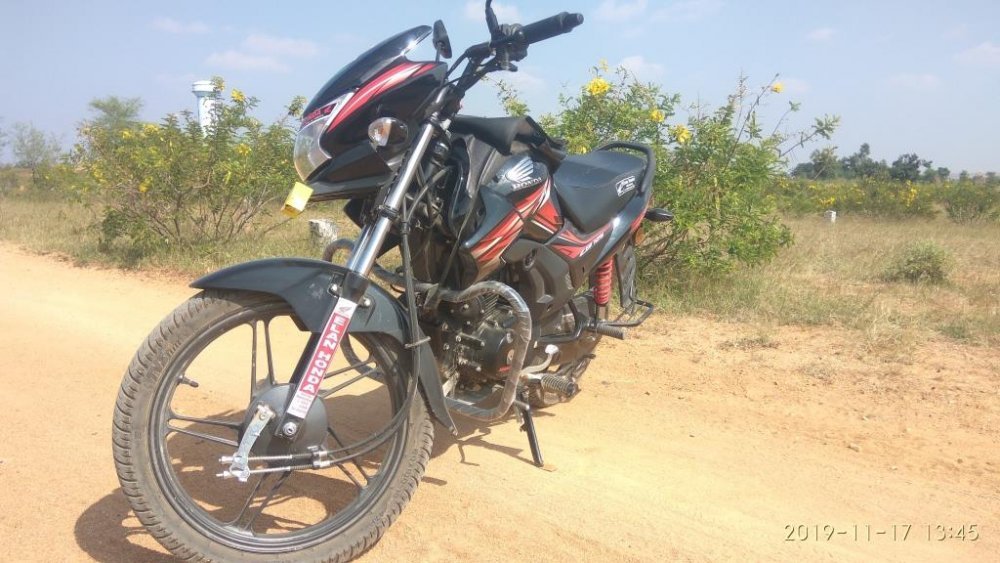 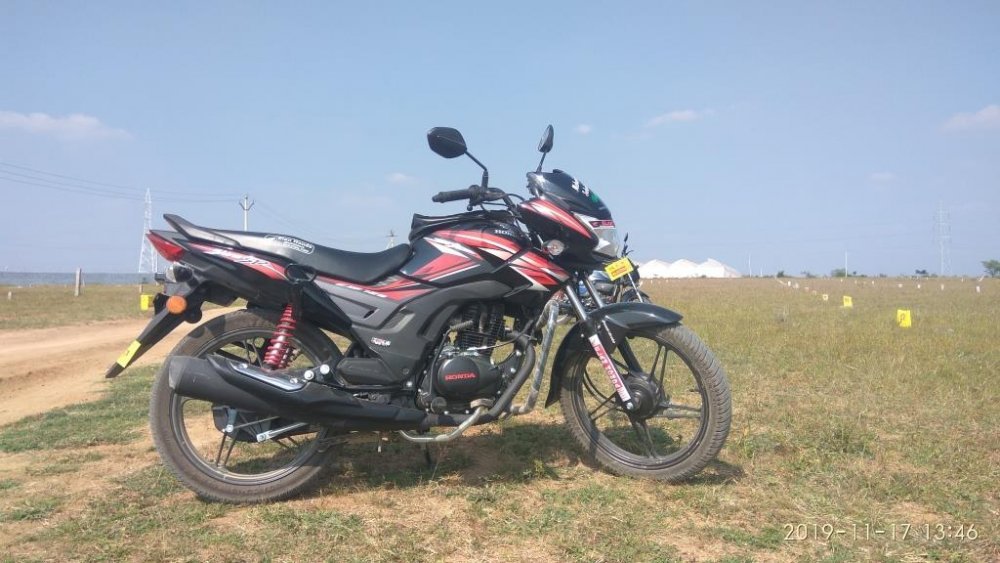 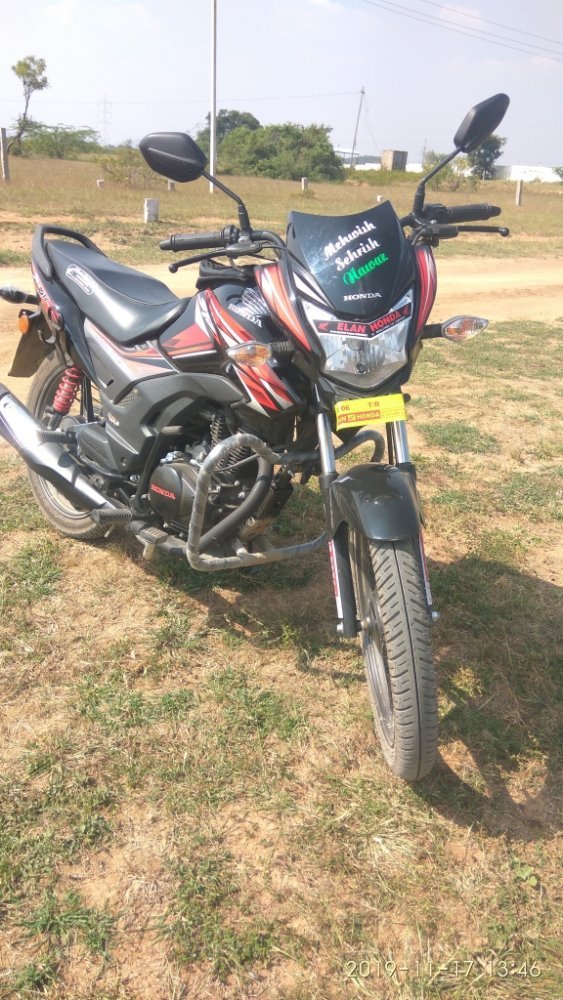 Front View. The names are of my niece and nephew's .

1. Skinny rear tyre. For extracting more mileage they have reduced the rear section. Will go for wider Tyre next time.
2. Misses out on engine kill switch.
3. 3Ah small battery. My jupiter has 5Ah battery but this one has smaller one. It comes with Amaron Battery.
4. Paint quality of some parts could be better.
5. Vibration from Visor.

mayankdixit said:
Congratulations for the bike. Nice color.
Is it not BS6?
Click to expand...
Thank you @mayankdixit . No it is BS-4 model. I did not know about launch of New shine otherwise would have waited for it.

New shine was launched just after a week we bought this.

Kumar_CarFreak said:
Happy and SAfe Miles Salahuddin with your new SP. I believe the bike must be a VFM one for you. Keep updating on the mileage, performance and maintanences.

Thanks
Kumar
Click to expand...
Thanks @Kumar_CarFreak will surely update about mileage.

max_jeopardy said:
Congratulations Salahuddin.. Nice decision to go for new bike as two wheeler meters are always tempered and bikes tend to adopt to the driving style of first owner.

Now its your's horse.. Tame it.. wish you many more miles on your new possession ..

SG
Click to expand...
Thanks @max_jeopardy After searching in olx I was not convinced to go for used bikes, who knows how the first owner had treated the bike?
S

Yesterday did a 100km trip from Mahabubnagar-Hyderabad. Started at 5:30 evening and reached Hyderabad by 8:00pm . Maintained speeds of 55-60km range. Though the bike is light weight but it feels heavy at higher speeds. I did not exceed 60kmph because of run-in period but still I felt confident riding it.

Before starting did a Tank Full. This time it took 9.47 litres of fuel. Which means 2.57 litres was already there. Bike had covered 475km and the mileage I got is just above 50kmpl which is better. Hope it increases with time. One of my friends Said he is getting 60kmpl.

It has run about 600km and yet to take it for first service In few days, will update after service.

If you have any questions i am happy to answer.

Remove the tank bag.The bike looks more beautiful without it.
And don't worry about BS6 and all that.It will still have 15 years validity on the R.C. So no worries on that front.
I was just curious so went about asking .
Last edited: Nov 19, 2019
S

I have a query. Shine sp comes with 80/100-18 tyre profile both at front and rear. The rear one looks skinny so I want to change it. Not now but I will run it for 15k km atleast.
What should be the upgrade size and brand?

Did first service of Shine few days back at 800km odo. The Service was done at Orange Honda SC Tolichowki, Hyderabad. Took the bike there at 9:30am and already 24 bikes were in queue. SA asked me to visit after 3pm so came back from there. Couldn't see how they serviced the bike as i was not present there, took the bike at 5pm. The total bill was 400/_ for the Oil.

There was not much issues to report, no unusual sounds from engine while running or no heating problem,Everything's fine. But after taking the delivery side panel is loose and making noise. Apart from that nothing else.

I found that stock headlight bulb is not good, you can't see what's there in front of you in night. Illumination is not good and it does not give you confidence to ride. You cannot see the potholes at all, headlight needs upgrade. Today morning I took the bike on Gachibowli ORR exit and drove it up-to 70 kmph, The bike just takes off once it crosses 50kmph, I just loved it the engine sound was so pleasant to hear. The grunt it produces makes the rider smile. No vibration at all I think it can easily cruise at 80kmph.

The bike is getting smoother and smoother as it covers each KM. Its close to 1000km within 3 weeks of buying.The mileage at first tankfull was 50kmpl this time I will update the exact figure. One more thing is I have not got number plate yet. The guy at RTA office said that I will get the number plate from Dealer , because they have stopped fitting number plates at RTA office since October month and dealer said the number plate will be fitted at RTA office so I dont know who is correct and who is not. Do I have to visit Mahabubnagar or I can get it from ant Honda dealer in Hyderabad?
S

Shine has crossed 1500km within a month and is going strong. Mileage has been improving post 1st service and now I am getting around 55KMPL which is very good considering the traffic of Hyderabad. Meanwhile I did two highway rides also between Hyderabad-Mahabubnagar, one solo and another with pillion. During solo ride the bike responded well to throttle inputs and max speed I did was 90kmph, After you cross 60kmoh the engine behavior changes, below 60 it is very refined and silent but post 60 you can feel the engine grunt and it just pulls upto 80 with ease. I maintained 70 speed and bike was cruising comfortably. No engine overheating issues as of now maybe because of the winter season.

I did not feel tired after 2.5 hours ride in afternoon, the seat is very comfortable the handle bar is not sporty but you can find a comfortable position and ride without any back issue. The bike is well suited for the speeds of 70-80 kmph post that it will pull but you will be putting load on engine. It can cruise at 70 all day without engine being tired so knowing the limitations of the bikes we can use it well. The bike has till now used 25 liters of fuel for 1950/_ . and it runs at 1.33 rupees for 1 KM.

I will attach the photos of Highway ride soon.
S

Some more photos of my ride: 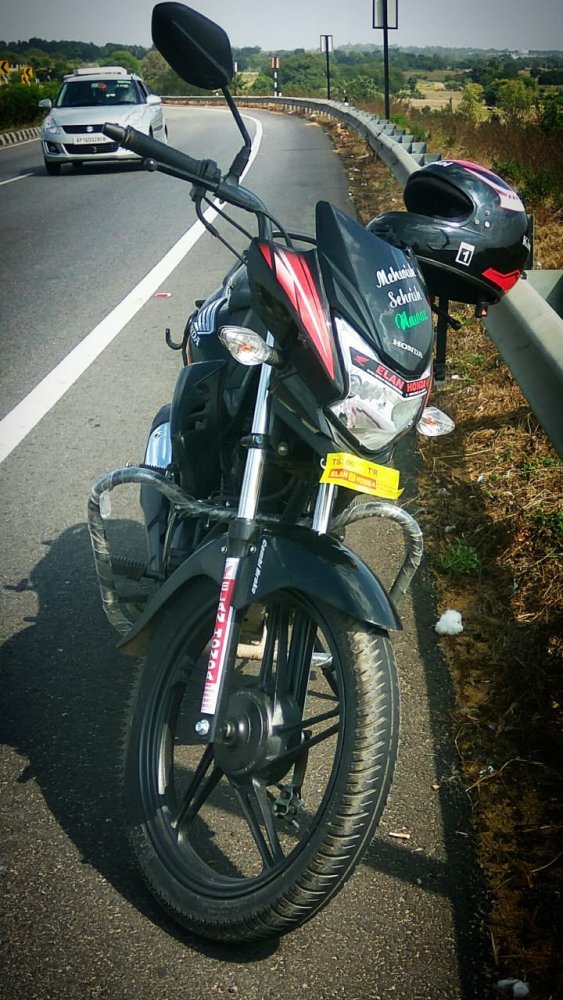 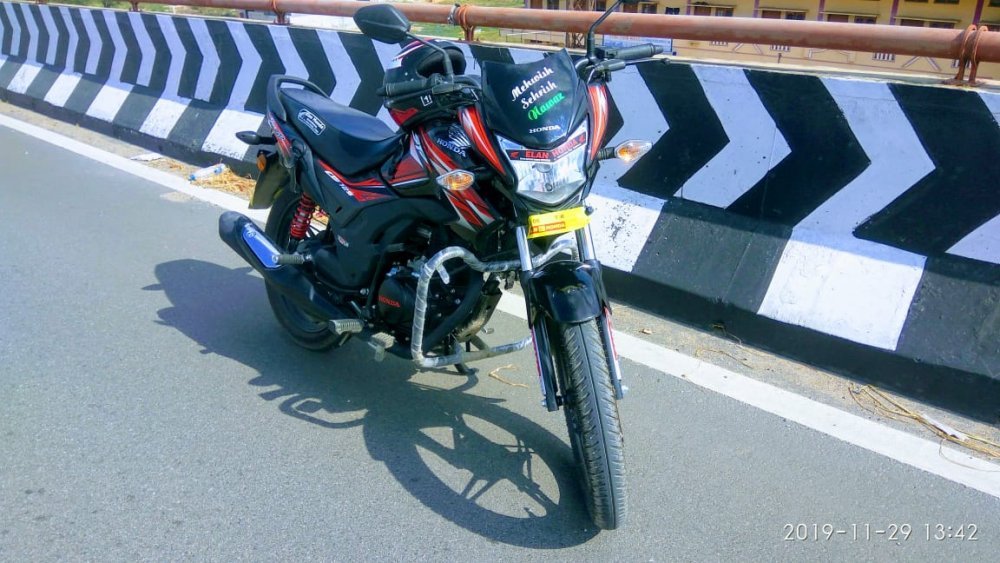 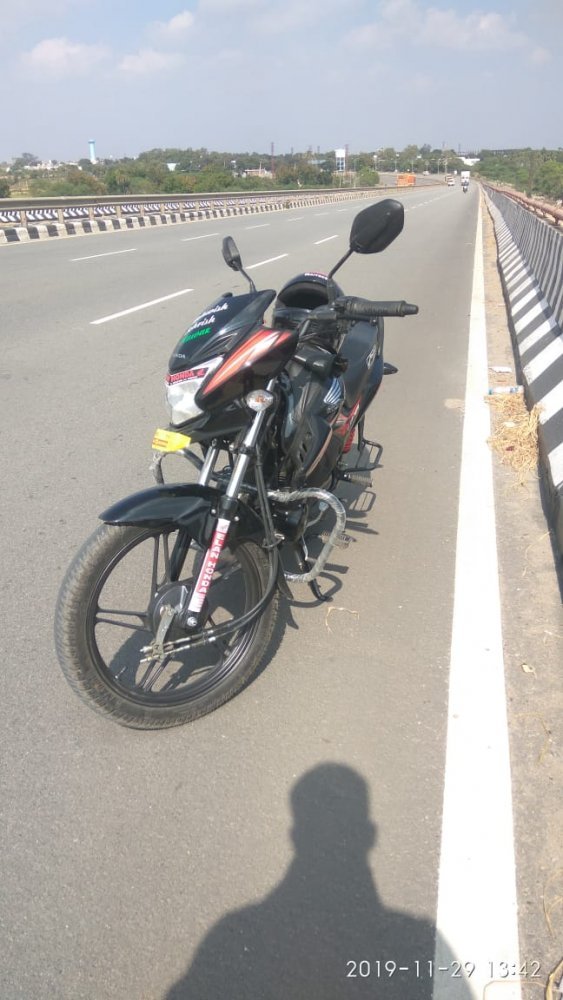 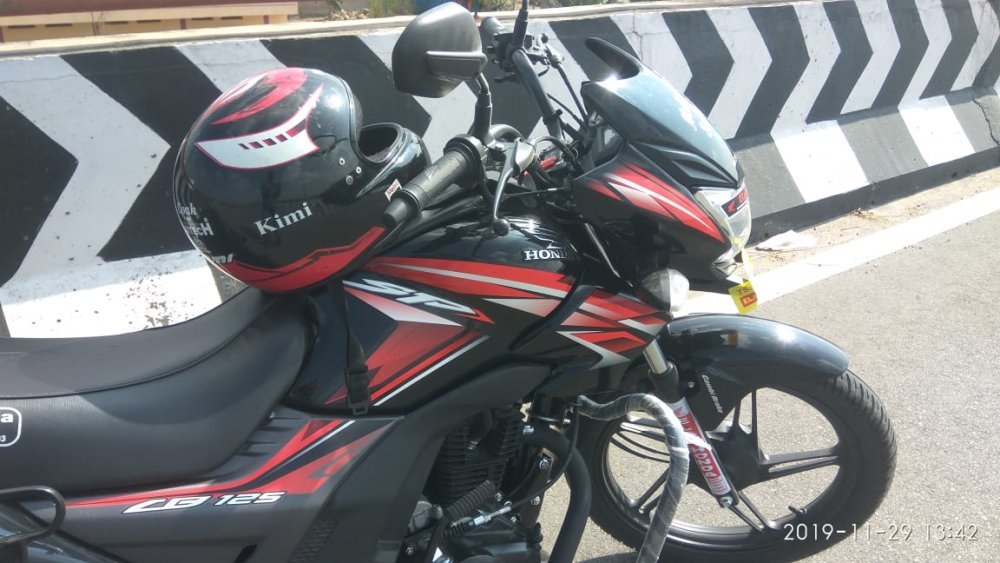