Get Details of a Vehicle via SMS

This facility has now been blocked. NIC and other govt departments, it seems, have become aware of security implications of information disclosed by this method.
G

NH08 said:
This facility has now been blocked. NIC and other govt departments, it seems, have become aware of security implications of information disclosed by this method.
Click to expand...
+1
Just today was discussing about this topic with one of my friend. So was giving him a trial; but some error was displaying!!!
"Sorry your Mobile number is Not Authorized for this Service!"

it has started working again, there must be some tech snag during that time. I tried just now and it worked.
G

Its not showing the owners name and no. of owner.
B

Re: Should Vehicle Registration Details Be Accessible Online?

Looks like ..its working for New Vehicles and Name is not displayed .

How to know ownership details of a vehicle through mobile

Saw someone zipping past in a vehicle and want to know his/her name? That vital piece of information, which can later lead to much else, is now only an SMS or a simple Web search away.

In an era when we are all becoming more concerned about our privacy, a service that gives away a vehicle owner's personal details via SMS is sure to raise some heckles. 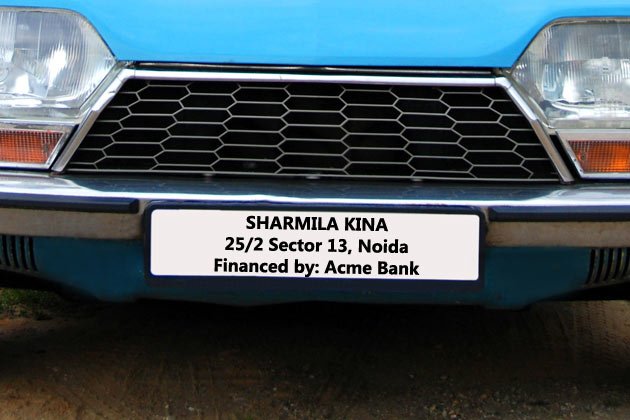 On the face of it, this may appear to be helpful data that could come in handy during road accidents and rash driving cases, before purchasing a second-hand vehicle or for law enforcement and investigation purposes. But making such information so easily available will jeopardise the privacy of individuals, especially that of women.

Stalkers and others with mala fide intentions can make use of this to know names, they would have otherwise found difficult finding, and then look up on social networking websites for matches and further details.

The need for making such information, that we would generally consider to be private, is debatable. In addition to the VahSar service mentioned above, here's a list of other similar online motor vehicle information search services in different states:

National
Delhi
Punjab - Jalandhar
Punjab - Sangrur
Goa - When checking I found it is not working. Some times time might be constraint. So try during working hours. It might work
Andra Pradhesh
Kerala
West Bengal


These services are powered by Vahan, an information communication technology based solution for vehicle registration initiated by Ministry of Road Transport & Highways in association with the National Informatics Centre (NIC).

The data is fetched from a national register, that is a centralised database for driving licences and registration certificates, which at the time of its launch in July 2011 included vehicle data from 95 per cent of the 975 Road Transport Offices across the country.

According to the official Vahan website using the vehicle search feature citizens "can only search their own vehicle by providing full registration no and last five digit of chassis no." The government of India official portal, India.gov.in, states that the "data is captured and stored in a secured environment for easy access by the competent authority." Given the ease with which information from the database can be accessed everyone seems to have been designated as a 'competent authority'.
The number 9212357123 is apparently a Tata Indicom CDMA number and is used for multiple services by the NIC, such as Central Board of Secondary Education examination results, finding polling booth details during elections or to know status of RTI complaints.

While the Ministry of Road Transport & Highways is handing over our personal information to anyone who comes looking for it, traffic police in cities including Delhi and Bangalore are using vehicle registration numbers to let citizens know if they were caught flouting any traffic rules recently.
The use of registration numbers by Bangalore and Delhi police exemplify how the free flow of information can actually be helpful. But opening up private information of individuals for anyone to access is something needs a re-look into.

Individuals trust government bodies with information because they have no other choice and therefore governments must also reciprocate and add barriers that will allow only justifiable requests for access to their private data.

Re: How to know ownership details of a vehicle through mobile

I got only this information for both of my cars, nothing else.
RC/FC Expiry:04-FEB-23
MV Tax upto:NA

I got the Below info for 2012 registered Vista

but, When I tried previously for my Black Indica, I received the Message with Owner name, Registered Area

AppU said:
I got the Below info for 2012 registered Vista

but, When I tried previously for my Black Indica, I received the Message with Owner name, Registered Area
Click to expand...
Even I got the same for my car. By no details for my bike [2004] and my m800 [2008]

Just Now checked for all my Bikes,

Hi,
How do i register to vahan website. Its asking for login details.
do i have to pay any fee for registering the same.
Please do help me out.
and how to get details of a vehicle if its not found through vehicle service ????
urgently I need my vehicle detail.
Last edited by a moderator: May 2, 2013

Its working in Goa too. But only limited info like RC/FC Expiry date, MV Tax upto, and Finance is available.