Gaurav Gill just a win away from APRC crown at the FIA Asia Pacific Rally Championship being held in Johor Bahru, Malaysia. 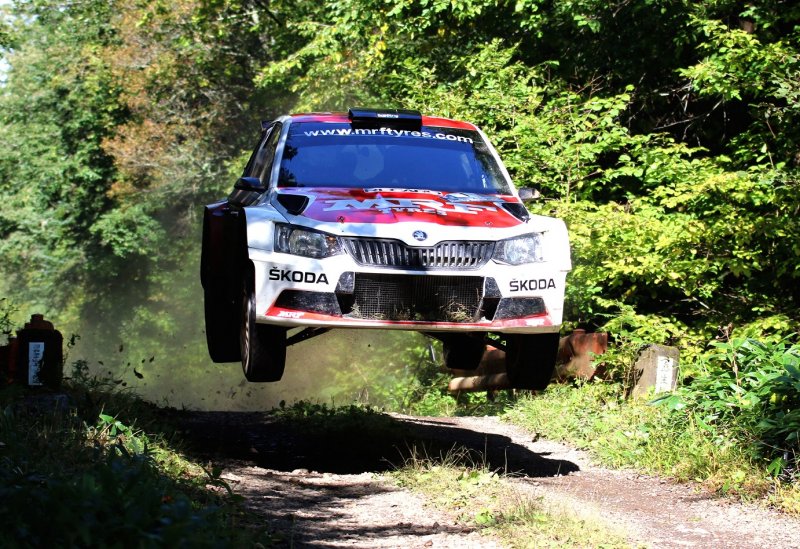 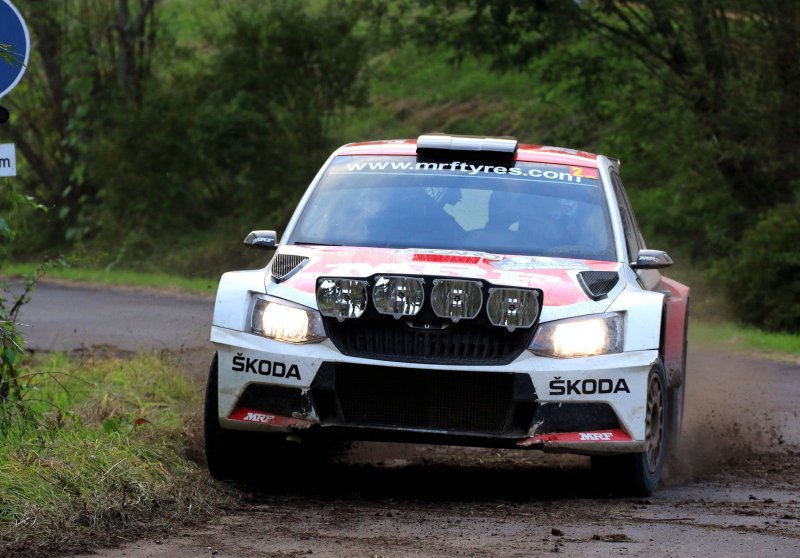 ​
Johor Bahru, October 27: Team MRF’s Gaurav Gill is just one win away from regaining the FIA Asia Pacific Rally Championship crown as he heads into this weekend’s Malaysian Rally here, the fifth and penultimate round of the series.

The Rally, which begins on Saturday after Friday night’s ceremonial flag-off in the city, comprises 14 Special Stages covering about 227 Kms. The competitors will cover a total of 572 kms during the course of the event.

After winning all the four rounds this season in New Zealand, Australia, China and Japan, and two still to be run (Malaysia and India), Delhi-based Gill enjoys a commanding 42-point lead over his team-mate Fabian Kreim of Germany. A win here on Sunday will ensure Gill his second APRC crown following his success in 2013.

Piloting the Race Torque-prepared MRF Skoda Fabia R5, Gill, who turns 35 a day before the sixth and final round in Chikkamgaluru, India (Dec 3-5), has barely put a wheel wrong in the championship this year as he mastered varying terrains and extreme weather conditions without compromising on pace that left his rivals chasing shadows.

The Malaysian Rally route, which is a mix of narrow and flowing dirt tracks through the nearby palm oil plantations, has always challenged the best of drivers and machines. Also to be factored in is the hot and humid weather besides heavy tropical rains, like the one that lashed the city for three hours and more this afternoon.

For the Malaysian Rally, Gill, who won here in 2014, will have his long-time co-driver Glenn Macneall of Australia back in the saddle. The experienced Aussie missed the Japan round where Gill was partnered by Belgian Stephane Prevot, while 24-year old Kreim has Christian Frank in the co-driver’s seat, also in a MRF Skoda Fabia R5.

“We have had a perfect season and have the title in our own hands in Malaysia. My team-mate Fabian Kreim still has a chance of winning the title. It is going to be another exciting battle. It would obviously be a dream to travel as champion to the grand finale of the APRC season in my native India,” said Gill.

“I am very happy with my first season in the APRC and didn’t believe I would be challenging for the title at the first attempt. However, my chances of winning the title are very slim and Gaurav has driven a flawless season so far. All that is missing from me is a win, and I’m out to change that in Malaysia,” said Kreim.
Click to expand...
Official 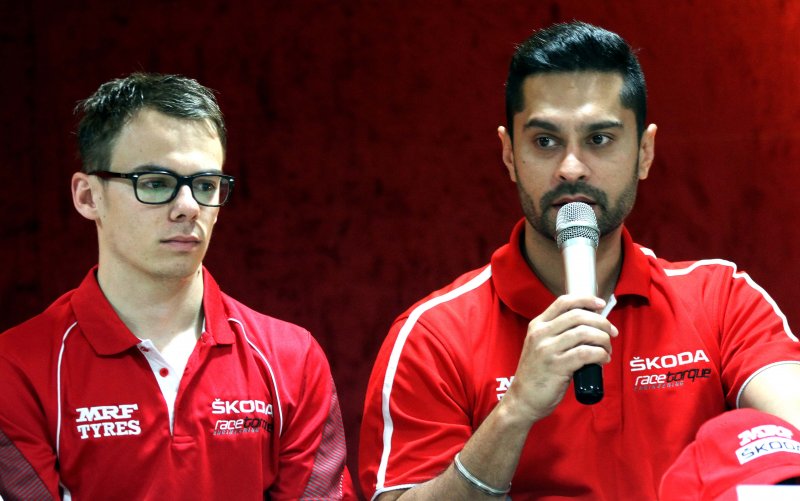 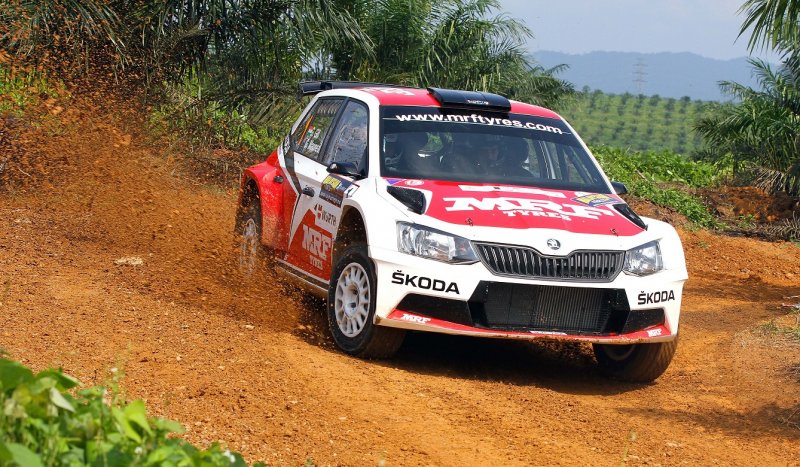 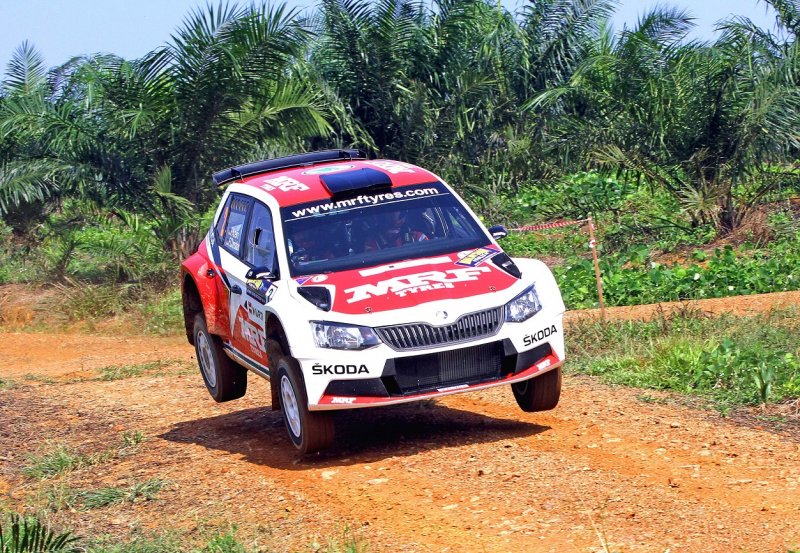 ​
Johor Bahru, October 28: With the onset of monsoon in this region, Team MRF’s Gaurav Gill, who needs a win here in the Malaysian Rally to seal the FIA Asia Pacific Rally Championship title, cautioned that the weather could hold the key to the outcome and “fireworks” of a different kind can be expected this Diwali weekend.

The two-day Rally commencing tomorrow, is the fifth and penultimate round of the FIA APRC and Gill, having won the previous four rallies, is poised to annex the title that he had last won in 2013. The sixth and concluding round will be held in Chikkamagaluru, India, on Dec 3-5.

Delhi-based Gill, speaking at ​the pre-event press conference here today to the accompaniment of thunder and heavy rains, opined that the wet weather will put to test the durability of both crews and their cars over the next two days.

Thursday’s mandatory reconnaissance run was all but a washout as portions of some Special Stages in the nearby palm oil plantations turned into mini rivers and unmotorable.

“Diwali is a big festival for us back home in India, but for me, the fireworks can wait until the Rally is over on Sunday afternoon. I wish everyone a happy and safe Diwali, and a prosperous year ahead,” said Gill who, like his team-mate Fabian Kreim of Germany, is driving the MRF Skoda Fabia R5.

On a more serious note, Gill, who leads Kreim by 42 points in the Championship, ​said: “It is going to be very tricky and difficult going since lots of rain is forecast for this weekend. So, it is not about just speed. We have to be careful.

“We have made a few changes to the car. After the Rally Hokkaido in Japan, we changed the engine and it still needs to be run in some more. We did some testing here on Wednesday and then today’s Shakedown, but we are settling in nicely.”

Kreim, fresh from winning the German championship last weekend, was as cautious and agreed that the Rally will not be so much about speed as driving sensibly.

“I have a very good feeling about our car after the test and we hope we can be as quick as Gaurav. Our car is better than what it was in the previous round in Japan. It is hot and the humidity is quite high. It is a different rally than all other APRC rounds and I think, it will be very challenging,” said Kreim.

The 24-year old German was quicke​r than Gill in this morning’s Shakedown, but the Indian shrugged it off saying he opted to eschew risks. “I was more intent on spending as much time in the car as possible and did not really push or take risks ahead of the Rally,” said Gill.

The Rally comprises 14 Special Stages of 225.82 Kms to be run on Saturday and Sunday after tonight’s ceremonial flag-off in the city.
Click to expand...
Official 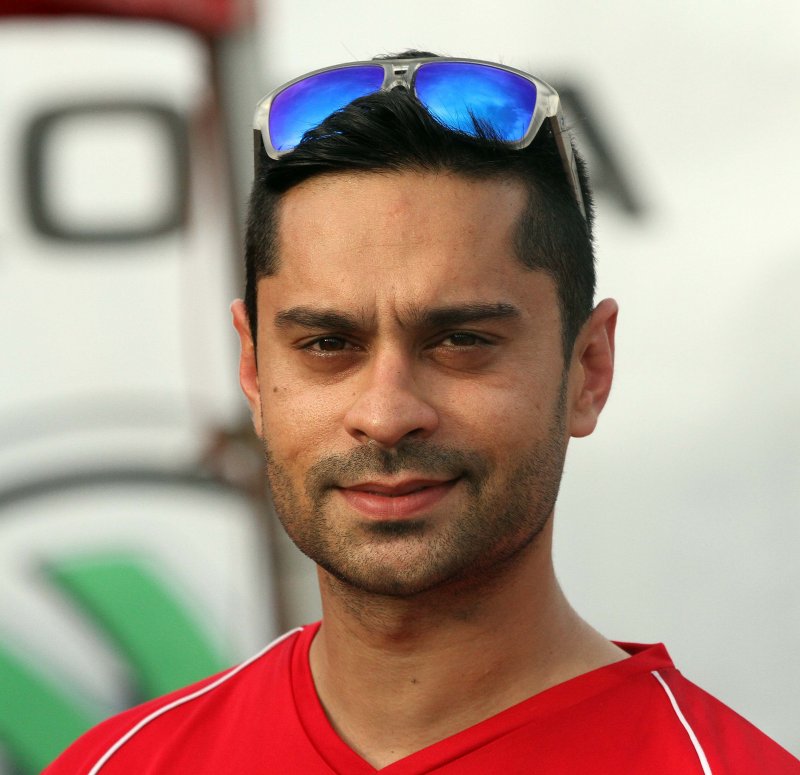 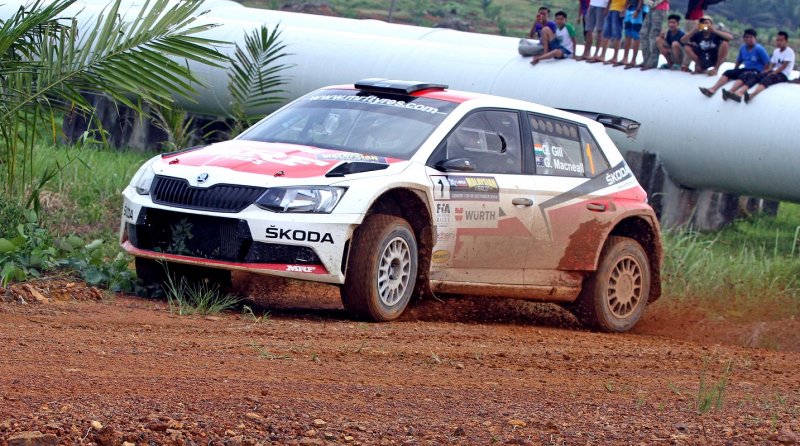 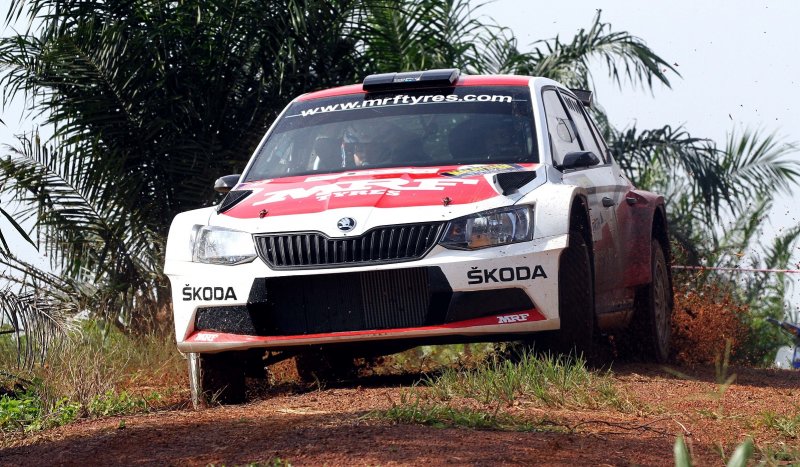 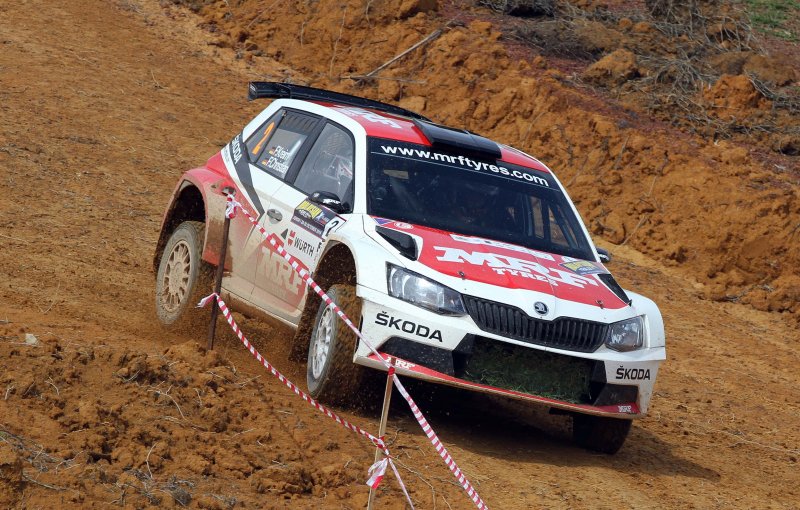 ​
Johor Bahru, October 30: Gaurav Gill of Team MRF took a giant stride towards regaining the coveted FIA Asia Pacific Rally Championship title as he completed Leg-1 of the Malaysian Rally with a seven-minute lead even as team-mate and his closest challenger Fabian Kreim retired with a gearbox problem here today.

While the rains stayed away, Gill (co-driver Glenn Macneall) drove his MRF Skoda Fabia R5 with great maturity to survive some tough moments and looked set to win his fifth consecutive APRC round this season which will ensure him the title that he last won in 2013.

Delhi-based Gill tempered his aggressive driving style to suit the conditions as he nursed the car to the finish after surviving turbo and overheating problems due to grass clogging the radiator grill for a seven-minute advantage over second-placed Michael Young (Malcolm Read) of Cusco Racing.

“I am very lucky to be at the finish. It was a tough day. We had issues with overheating of the turbo leading to lack of boost after grass blocked the radiator grill in the very first Stage. The water temperature went through the roof. So, I had to nurse the car all the way through. We had a better run in the second half of the day when it was cooler.

“It was not just about competing against others but also driving according to the conditions. Like I said, I am happy to be here at the finish. Hopefully, I will be able to finish the rally tomorrow without any problems,” said a relieved Gill.

Despite the problems with the car, Gill was still far quicker than the rest of the field that included World Rally Championship driver Jari Ketoma from Finland who drove a Mitsubishi Mirage.

“I am happy to finish four minutes ahead of Ketoma in the overall classification. Ketoma is one of the finest rally drivers in the World, but the weather conditions, hot and humid, so typical of Malaysian Rally, proved too much for him,” Gill said.

Meanwhile, German champion Kreim (co-driver Frank Christian), trailing Gill by 42 points in the APRC stakes, pushed his MRF Skoda Fabia R5 to the limit in a bid to stay with the Indian. In the process, he went off the road into a ditch on SS-6, and while trying to reverse the car, broke the gearbox.

“That is the nature of the sport. I was pushing hard, but we went into a ditch in SS-6. I engaged the reverse gear trying to get back on the road, and it damaged the gearbox,” said Kreim who will rejoin the Rally tomorrow in a bid to garner crucial leg points.

The Rally ends tomorrow when the remaining six of the 14 Special Stages will be run. 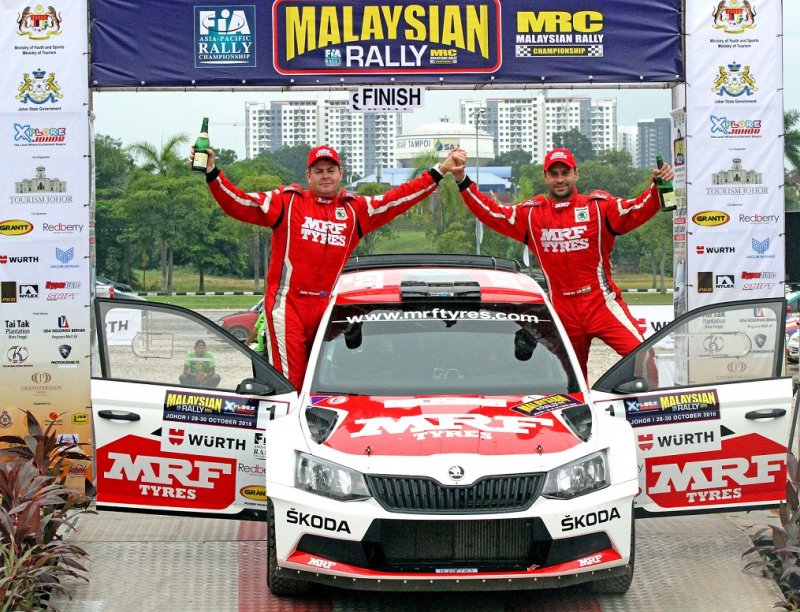 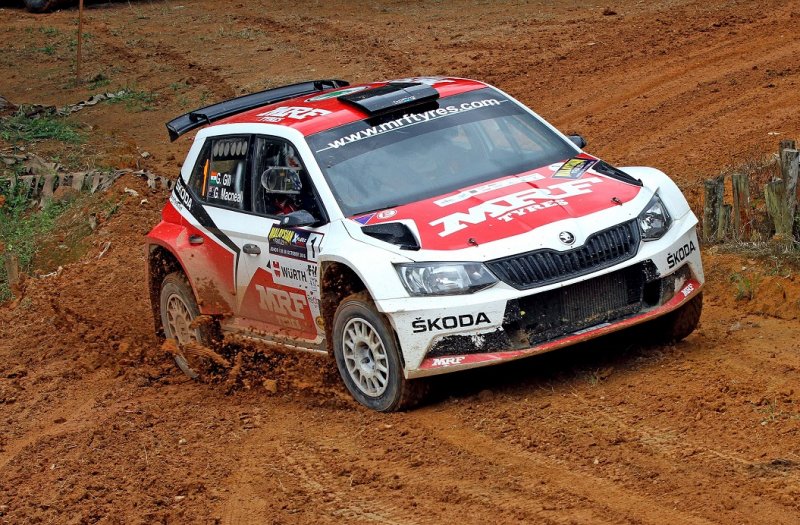 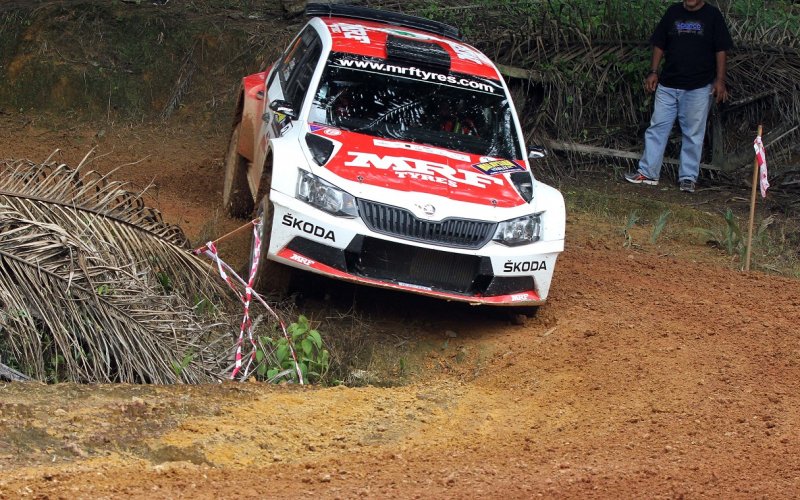 ​
Johor Bahur, October 30: Gaurav Gill of Team MRF scripted a momentous chapter in the history of Indian motorsport by sealing the 2016 FIA Asia Pacific Rally Championship title with a round to spare as he won the Malaysian Rally here on Sunday. It was Gill’s second APRC crown following his success in 2013.

Having won the previous four rounds of the APRC this season, Delhi-based Gill went into the Malaysian Rally with a 42-point advantage over team-mate Fabian Kreim whose retirement yesterday due to gearbox problems effectively ended the championship battle between the two.

The victory took Gill’s tally to 184 as against Kreim’s 126 for an insurmountable lead. The APRC season concludes with the India Rally in Chikkamagaluru (December 3-5).

“While every win is special, the second title is even more so. I had no clue at the start of the season. There were so many variables, like a new car (Skoda Fabia R5) that I had not driven before and with Fabian who last week won the German championship and had more miles in the R5, as team-mate.

“Luckily, I had a perfect car and the MRF tyres worked well. Overall, I put in consistent performances through the season and I now look forward to the last round in Chikkamagaluru in December where I will be driving in front of home crowd,” said Gill who opined that he had improved tremendously over the past few years.

“Like wine, Rally drivers get better with age. Today, I am much quicker than I was in 2013, but there is more finesse to my driving,” he commented.

Mr Arun Mammen, Managing Director, MRF Ltd, said: “Congratulations to Gaurav Gill on winning the APRC title for the second time. It has been a tremendous APRC season for Team MRF and our success is another testimony to the high quality of our tyres. Overall, it has been a great team effort.”

Gill felt that the season turned decisively in his favour when he won the fourth round in Japan with a new co-driver. Belgian Stephane Prevot came in for regular co-driver Glenn Macneall who skipped the round.

“I had never sat with Stephane and that we still managed to win in Japan was a huge boost for me. I think, that was the highlight this season as far as winning the championship was concerned,” Gill said.

On his performance in the Malaysian Rally, Gill attributed his success to mature driving that saw him dominate the first day before easing off today as the terrain turned slushy and slippery following heavy overnight rains.

“Just five minutes before I left the Service Park for the Special Stages today, I asked the team to slap on full wet tyres instead of the half-cut rubber the car was fitted with. It was a gut feeling and it proved to the correct choice as the conditions were pretty tough because of overnight rains. I knew that Fabian was pushing hard, but I drove pretty conservatively since I had huge overnight lead,” Gill said.