The EcoBoost is indeed going places. Ford has rolled out 2 millionth engine and set a new milestone for itself.

​
Ford Motor Company today celebrated a manufacturing milestone for its fuel-saving EcoBoost engines: Two million have been produced globally since Ford launched EcoBoost in 2009. Growing customer demand for EcoBoost-powered vehicles in Ford’s major markets worldwide is driving engine production, with output now averaging more than 100,000 engines per month, up from 65,000 in 2012.

“Ford EcoBoost delivers great performance with lower fuel bills, a recipe which is proving incredibly popular with consumers around the world,” said Joe Bakaj, vice president, Powertrain Engineering, Ford. “EcoBoost engines are attracting new customers to the Ford brand every day, and our plants are working hard to keep up with demand.”

Ford’s global EcoBoost engine family now includes the 1.0-litre three-cylinder; the 1.5-litre, 1.6-litre and 2.0-litre four-cylinder engines; and the powerful and efficient 3.5-litre V6. EcoBoost will be offered on nearly 80 per cent of the company’s global nameplates by the end of 2013.

In Asia Pacific, sales of EcoBoost vehicles through August are up 202 percent year-over-year in 2013, including a 189-percent rise in China. Ford plans to offer the fuel-efficient engine in 20 vehicles in the region by mid-decade, a five-fold increase from 2012.

Ninety-five percent of Kuga buyers in Asia Pacific are choosing the1.6-liter EcoBoost engine, while 90 percent of Edge owners and 62 percent of Mondeo buyers are opting for the efficient engines. Ford will soon begin production of the 1.0-liter EcoBoost at the $500 million Changan Ford engine plant in Chongqing, China, which opened in June.

In Europe, exceptional demand for the 1.0-litre EcoBoost engine – International Engine of the Year 2012 and 2013 – is fuelling a doubling of production capacity at the Cologne, Germany, engine plant to more than 1,000 engines a day. Already available on five European nameplates, the 1.0-litre engine will be fitted to 11 models by 2014. The three-cylinder unit is being chosen by a growing share of customers during 2013, accounting for 43 per cent of B-MAX sales, 32 per cent for Focus, 26 per cent for Fiesta; and 24 per cent for C-MAX and Grand C-MAX sales.

EcoBoost powertrains also are driving high demand for the Fiesta ST (1.6-litre EcoBoost) and Focus ST (2.0-litre EcoBoost), while 18 per cent of customers for the Kuga are selecting the 1.6-litre EcoBoost option in a segment which traditionally favours diesel engines. Nearly 40 per cent more European customers are familiar with EcoBoost technology today compared to 2011, internal Ford data shows.

In North America, internal Ford data shows that the EcoBoost engine is now the most recognised fuel-efficient engine among consumers. In addition, consumers are nearly 50 per cent more likely to consider purchasing a Ford vehicle if they are aware of EcoBoost than those who are not familiar with the engine.

The popularity of EcoBoost in North America is reflected in high take rates on key models:

This year, EcoBoost will be available on more than 90 per cent of North American nameplates, rising to 95 per cent by 2015. To meet demand for the award-winning 2.0-litre EcoBoost engine, Ford is investing nearly $200 million to build the engine at its Cleveland, Ohio, engine plant, with production starting in 2014.
Click to expand...
Drive Safe,
350Z

Ford’s 1.0L EcoBoost has won ‘International engine of the year’ award for the third consecutive year.

A small petrol engine that powers Ford cars including the new Fiesta has fought off competition from premium brands and supercars to win the “Oscars” of the engine world for an unprecedented third time in a row.

A panel of 82 automotive journalists from 35 countries also named the 1.0-litre EcoBoost the “Best Engine Under 1.0-litre” for the third year in a row at the Engine Expo 2014, in Stuttgart.

“To deliver the complete package of eye-popping fuel economy, surprising performance, quietness and refinement we knew this little 1.0-litre engine would have to be a game changer,” said Bob Fascetti, vice president, Ford Powertrain Engineering. “Through our One Ford approach to development, EcoBoost continues to set the benchmark for power combined with fuel efficiency from a small petrol engine.”

The engine has now won 13 major awards. In addition to collecting seven International Engine of the Year awards in three years – including Best New Engine in 2012 – the 1.0-litre EcoBoost also has been awarded the International Paul Pietsch Award 2013 for technological innovation in Germany; the Dewar Trophy from the Royal Automobile Club in Great Britain; and in the U.S., the Breakthrough Award from Popular Mechanics magazine. Ford also is the first automaker to win a Ward’s 10 Best Engines trophy for a three-cylinder engine.

“This year’s competition was the fiercest yet, but the 1.0-litre EcoBoost continues to stand out for all the right reasons – great refinement, surprising flexibility and excellent efficiency,” said Dean Slavnich, co-chairman of the 16th International Engine of the Year awards and editor of Engine Technology International magazine. “The 1.0-litre EcoBoost engine is one of the finest examples of powertrain engineering.”

The all-new Mondeo will continue the European roll-out of the 1.0-litre EcoBoost engine when it launches later this year; the smallest engine to be specified in such a large family car.

Ford 1.0-litre EcoBoost-equipped vehicles now account for one in five of all Ford cars sold in Ford’s 20 traditional European markets**. For the first five months of 2014 the markets where 1.0-litre EcoBoost proved most popular were the Netherlands (38 per cent of all cars bought), followed by Denmark (37 per cent) and Finland (33 per cent).

“Three years have gone and many new three-cylinder engines have appeared, but the Ford 1.0-litre EcoBoost is still the best,” said Massimo Nascimbene, juror and writer, Italy.

“The success of the 1.0-litre EcoBoost engine has simply snowballed. Since launch we have now extended availability through the range of Ford vehicles and through markets worldwide to set a new global benchmark in powertrain engineering that delivers a direct benefit to customers – both in terms of fuel efficiency and performance,” said Barb Samardzich, chief operating officer, Ford of Europe.

More than 200 engineers and designers from Ford’s research and development centres in Aachen and Merkenich, Germany, and Dagenham and Dunton, U.K., spent more than five million hours developing the 1.0-litre EcoBoost engine.

The engine’s compact, low-inertia turbocharger spins at up to 248,000 rpm – more than 4,000 times per second and almost twice the maximum rpm of the turbochargers powering 2014 F1 race car engines.

With a cast iron engine block small enough to fit in the overhead luggage compartment of an aeroplane, the engine also features an aluminium cylinder head with an integrated exhaust manifold that lowers exhaust temperatures for optimised the fuel-to-air ratio. An innovative flywheel and front pulley design delivers improved refinement compared with traditional 3-cylinder engine designs.

“The 1.0-litre EcoBoost was created as a radical smaller-displacement engine to meet the biggest automotive challenge in the world – no compromise refinement, performance and great fuel economy,” said Andrew Fraser, manager, Gasoline Calibration, Ford of Europe. “The secret to EcoBoost success is a range of innovative technologies that deliver big car benefits from a small engine.”
Click to expand...
Drive Safe,
350Z 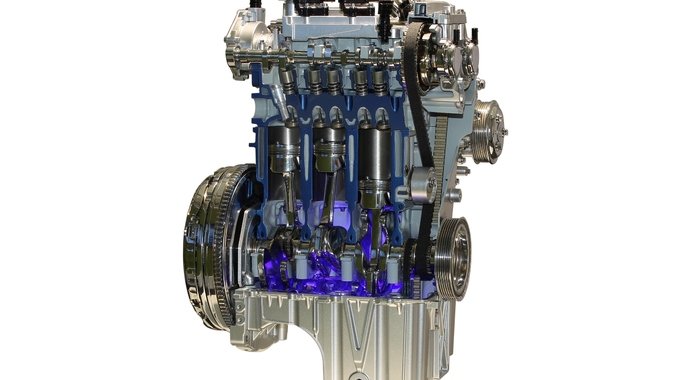 ​
Friends, Ford Motor Company is checking out a intresting new engine management approach that might be a key to help make the company’s highly appreciated 3-cylinder 1.0‑litre EcoBoost engine much more fuel efficient.

Fords 1.0 ecoboost engine wins again
Ford
This engine has proven itself better than the VW i.0 i3 TSi and Suzukis new 1.0 i3 Booster jet and Opels new 1.0 i3 T motor as well,

So all ecoboost owners

Click to expand...
1 more hot news, the Ford GT wins the 24 hr of Le Mans at De Sarthe France
it won with a 3.5l TT ecoboost v6 as opposed to v8 of Ferrari,Aston Martin and Chevrolet and Porsche's flat 6
Just makes Fords even more impressive