I got my FASTag (for ETC transactions) activated last week and have already used it 10-15 times on Mumbai-Pune expressway & NH4. It worked like charm but there are some things which definitely need improvement with the overall process. I have created a video of my overall view on the FASTag experience and what can be done to make it even better.

FASTag is near nonstop cashless toll money transfer process which is now operational across 300+ toll plazas in India. Its a radio-frequency identification technology (RFID) card. Its very simple-to-use, reloadable tag which enables automatic deduction of toll charges and lets one pass through the toll plaza without stopping for cash transaction.
In this video, we will go through the need, benefits, drawbacks and some cool suggestions to the FASTag process.

Can I request you guys to go through this and provide your feedback. If you find this helpful, please spread the word by sharing the video.

This is very innovative.Appreciated :) BTW,Is this RFID Sensor present on all Toll Plazas ?
Last edited: Oct 8, 2016

Thanks Bharath. Appreciate the words of encouragement !
Currently the RFID readers are installed on approx 300 toll plazas, but this will be extended to all plazas as we go along. Whats important is, we need to get the tag fpr our cars and start using it from now itself to set the standard high.

We, as car enthusiasts, need to start now and ensure it goes in the right direction. Urging everybody to get it done today !

You're right.I fully support this.This is a revolutionary Idea.So where can we go and get this FASTag ?

You get it at any of the POS locations.

YogiPunto said:
You get it at any of the POS locations.

List of Point of Sale locations- https://www.icicibank.com/Personal-Banking/cards/prepaid/fastag/fastag-pos-location.page
Click to expand...
Thanks for the valuable share.I shall look into it.Though I don't think I will be hitting the highways with a Matiz,I shall still try and get it.Because sometimes you never know,Things can get unplanned,Which is nice

The concept of time saving with FASTag is what lured me in getting one but finding cash paying vehicles plying in the dedicated FASTag lane is really a dampener. Due to this, even after the tag being read, the toll booth guy needs to reconfirm on intercom whether the transaction actually reflected in their system or not killing more time. A couple of months earlier, the lane used to be closed with cones and only after pointing towards the tag was the lane opened - it was so much easy back then.

This is a terrific initiative indeed. Especially during the long weekends or festive periods when you simply have queues of cars lined up for miles. This will definitely cuts short the stoppage time at Toll as I have personally experienced the fruit of RFID here in Sydney. However the success of this initiative is in the implementation. I mean is there any way the authorities can avoid non-RFID cars cutting into the e-toll Road? If this does not happen, then it defeats the very purpose of this initiative. Nevertheless, I feel this is a brilliant start

. Is there any site that shows the Tolls where the RFID is active currently? I am more interested to know the Toll plazas in TamilNadu that has this RFID active.
C

You may please visit the following link where the currently active toll plazas with fastag is listed.

Hope this information will help you.

How to get FASTag in Bangalore

This is about "How to get FASTag in Bangalore". In June 2017, I attempted to get IT, found it IRRITATING and gave up. I got one today within 2 hours of my 1st call.


Full Story:
I am planning to go to hometown this week, am worried about the long queues in Toll Plazas and I tried to get FasTag "online, called ICICI number and what not". I sent SMSs to ICICI and HDFC and got call from Reps. ICICI rep was disappointed that I had only one car. He didn't follow up after the 1st call. The SMS to HDFC resulted in a mail from hdfc.fastag@sahaj.co.in asking me to apply and transfer money to "Sahaj e-village limited", HDFC Bank, Kolkata.

I thought, "Kolkata ? You serious HDFC ?? What if the Tag gets lost in transit ???"... I didn't have interest to follow up that. I felt like getting Rs.50,000/- out of ATM during demonitisation drive. I just gave up.

Today, with the possibility of "getting stuck up in long Queues at ALL TollPlazas leading to Madurai" staring at me threateningly, I decided to get FasTag, COME WHAT MAY. After 15 minutes of usual on-line irritation for FasTag, my beloved God smiled upon me. This below, was the sequence:


Within 130 Minutes of the 1st call to Mr.Yogesh, my FasTag was up and ready to go. THAT, my friends, IS Service. Now to photos...


The view from outside the Car: 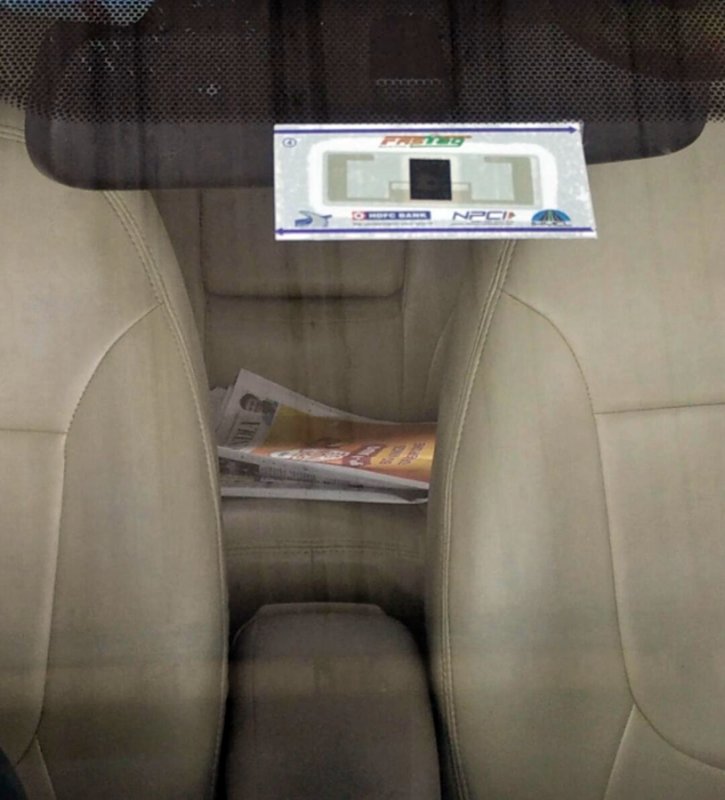 The two lines that you see in the center of the Pic are Reflections of the Roof in our Co car parking lot. (Ohhhh Yahhhh... it is a covered car park


The view from the Driver's Seat: The IRVM hides the FasTag card and no loss of view for Driver 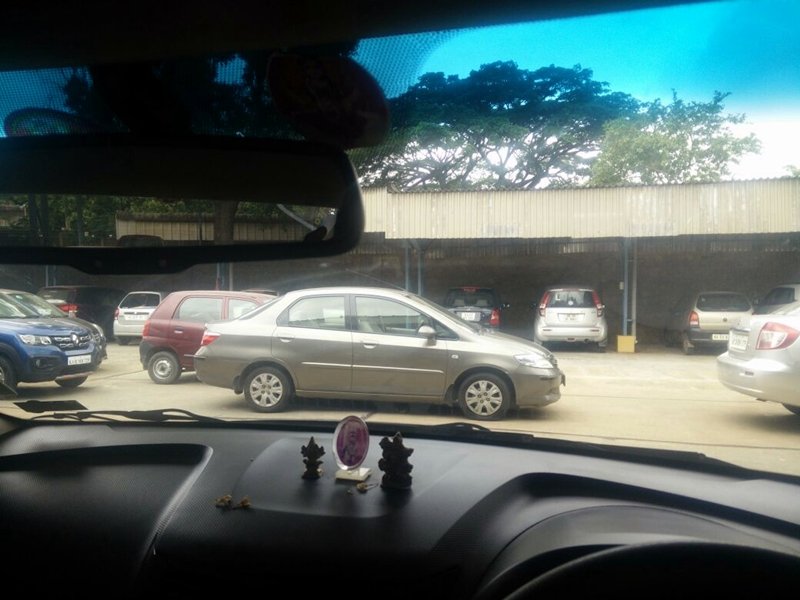 Close up view from inside: I don't know what the "4 within circle" means. 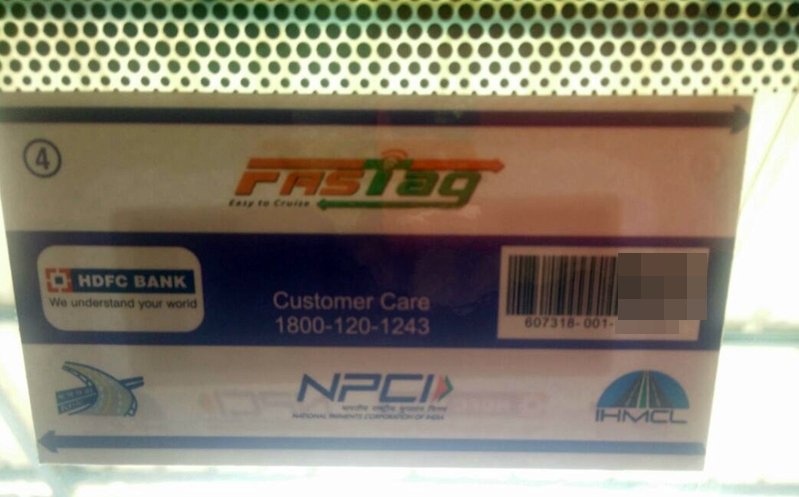 Online Screen: I could log-in as a 1st time user, using Customer ID, create password blah blah blah. Subsequently I could use my Cr Regn Nr and same password and enter the site. Two grudges... my name is wrong spelled and I could not see the balance amount in accound using "Mobile Browser". Mr.Murphy always laughs at me 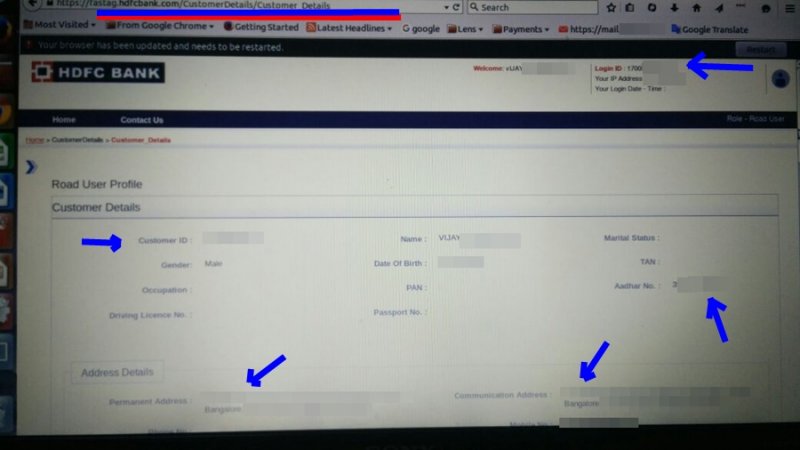 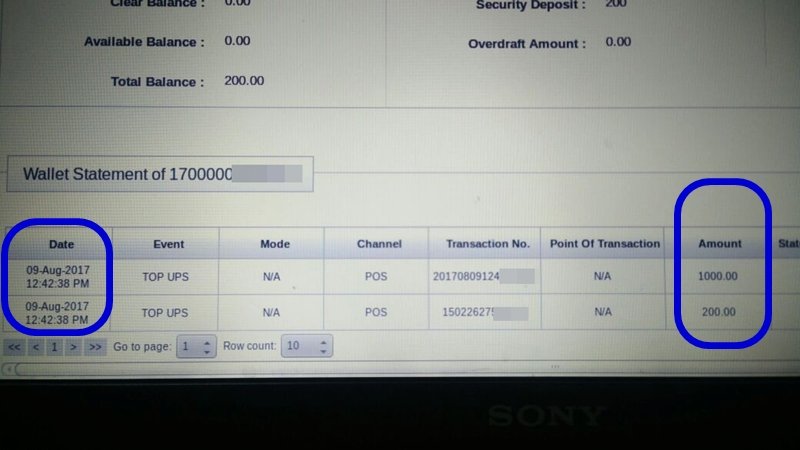 Waiting for the weekend trip.


For those from other Cities:
Call HDFC's toll free number 1800 120 1243 and they may give a local number near your location.

Disclaimer:
Apart from using HDFC Credit Cards, availing HDFC Ergo once (was it twice ??) and this FasTag mentioned above, I do NOT have any other interest in HDFC. I am NOT promoting HDFC FasTag. I just got IRRITATED in my attempts to get FasTag thro ICICI. I could have as well successfully procured few F-16 Fighter Planes. FasTag may also be available from Axis Bank and Karur Vysya Bank etc.

On 9th Aug, a FasTag card was installed in my car with a balance of Rs 1000. I wrote about it in Post # 10 above. Just TWO days later, I was on my way to my hometown and the Tag was put to use for the first time. Result ??? Shock and embarrassment.

But, H of the D of the F of the Ceeeeeeeeeeeeeee, had I been a Lawyer, I would have dragged you to Court.

My detailed first time experience with FasTag is written here in this link (http://www.theautomotiveindia.com/f...2-crdi-ex-60-000-kms-update-7.html#post546073)

Above are not perfect but I think are food for thought. We can save Millions of Liters of Fuel across India, if ETC is implemented correctly.
A

ETC is far from perfect. For passing the toll once, my tag from ICICI was debited twice - once when originally passed and again a month later in the name of dispute by Toll for twice the amount. Still patiently waiting for a solution chances of which do not look good.

Yesterday traveled from Pune to Mumbai and again back from Mumbai to Pune via expressway. I could not see any lane dedicated for Fastag. Also all lanes were flooded (as usual) by non Fastag vehicles.

Saw this news in Today's ToI, B'lore Edition. Highlights from the report are given below, alongwith my comments / reviews.

Team NHAI, don't you guys know something about "internal testing" before releasing the App ? My browser is good enough for recharging. And it remembers my login ID and password for the Tag. If NHAI guys ensure that the Tag is delivered within a week, I will be GLAD

Otherwise, this is a Junk Grade APP, IMHO.

(B) Another App - Fastag Partner :
RFID Tags have been factory installed in Cars since 2013. Some 74 Lakhs such RFIDs are not used now. This App is expected to convert them into FasTags. Let's see

(C) From 1st Sep, one Lane at 371 Toll Ps will be opened for FasTag vehicles. Will it be in addition to the existing dedicated Lanes or else .... ???

(D) From Oct, ALL Lanes in ALL (or is it 371) Toll Ps will have Tag readers. I see one advantage and one disadvantage here. Even when I am unable to align with Fastag lane, I need NOT pay by Cash. Problem is, "Fastag vehicles will loose out the current dedicated lane advantage and could spend more time at Toll Ps"

Here is the news article : 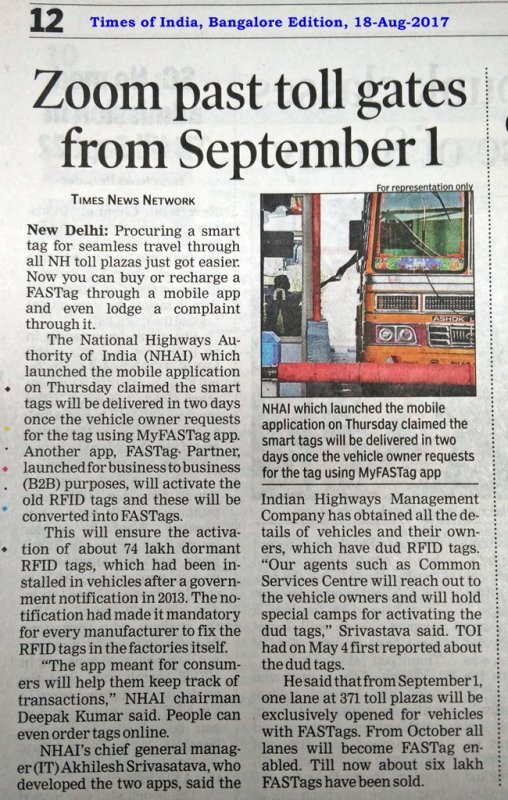 Almost every Truck has FasTag now, and they fill up the lane. Many a times I go into cash lane because that is moving 10 times faster. They should make a dedicated fastag lane for private cars only.
You must log in or register to reply here.
Share: Facebook Twitter Google+ Reddit Pinterest Tumblr WhatsApp Email Link
Top Bottom