http://www.globalncap.org/wp-content/uploads/2020/01/SaferCarsForIndiaTatTig.pdf
Global NCAP Latest Crash Test Results
Click to expand...
Was just going to post the same, you beat me. :)
As expected Tiago/Tigor secured 4 stars. It's a very good score. Just one negative point though is the body shell integrity was rated as unstable. I think same was the case with Zest too, being on the same platform. Anyway, happy to own one (Tigor).

Tata proves once again they know a lot when it comes to making vehicles with safety. (If they improve upon the service quality now, it will great.). Glad too see xuv300 achieving 5 star rating too.

Excellent work TaMo and Team, mind you the Tiago and Tigor are both based on the old platform.
The next update/V2 versions will be on the Alfa platform, on which Altroz is based, which has just received 5* safety rating.

Maruti will not send cars to Global NCAP for crash tests

At the launch of Tata Altroz, which received 5-star safety rating (for adult occupants) from Global-NCAP, the testing agency’s CEO and President, David Ward, urged other automakers, especially Maruti Suzuki, to start developing cars for India which are safe enough for a 5-star rating. If you had hoped Maruti to respond to this challenge with a yes, you would be wrong.

Speaking to Electric Vehicle Web on the sidelines of the Auto Expo 2020, CV Raman, Senior Executive Director, Maruti Suzuki, stated that the company will not be voluntarily sending its vehicles to be tested by Global-NCAP. His exact words were, “As far as Maruti Suzuki is concerned, we believe that all safety regulations which are mandated by the government and the recently introduced offset side impact and pedestrian regulation we are meeting..going forward SIAM as a body with the manufacturer are working to bring out the BNCAP. Anything that is led or driven by the government and recognized by the government is something that we would be definitely looking at. Any other agency, it’s okay for the strategy of other manufacturers but Maruti Suzuki would like to work within the ambit of the Indian government regulations.

After becoming the India's 'safest car', the Mahindra XUV 300 has added to its safety credentials. In January 2020, the Mahindra XUV 300 had achieved the highest rating of all Indian-made cars crash tested by Global NCAP. And now it has also been awarded the 'Safer Choice' Award by the global car safety watchdog. The Safer Choice award was instituted by Global NCAP in 2018, and is to be presented to cars that meet a certain high standard of safety and crash capability. The Mahindra XUV 300 is the first car to receive this award, since it meets all of the criteria listed to qualify for this honour. David Ward, CEO and President of Global NCAP said, "This is a historic moment for Mahindra and the Indian auto industry, marking a tipping point in vehicle safety performance for the country. After setting our 'Safer Choice' Award challenge in 2018 it is deeply satisfying to see an Indian automaker taking a lead on safety in this way." In the first test of its kind, Global NCAP has crashed the best-selling pick up model in Africa, the 2019 Nissan NP300 Hardbody, into a second-hand Nissan Navara NP300 manufactured in Europe in 2015. The unique car to car crash test graphically demonstrates the double standard currently applied by Nissan and other car makers to vehicle safety in Africa. 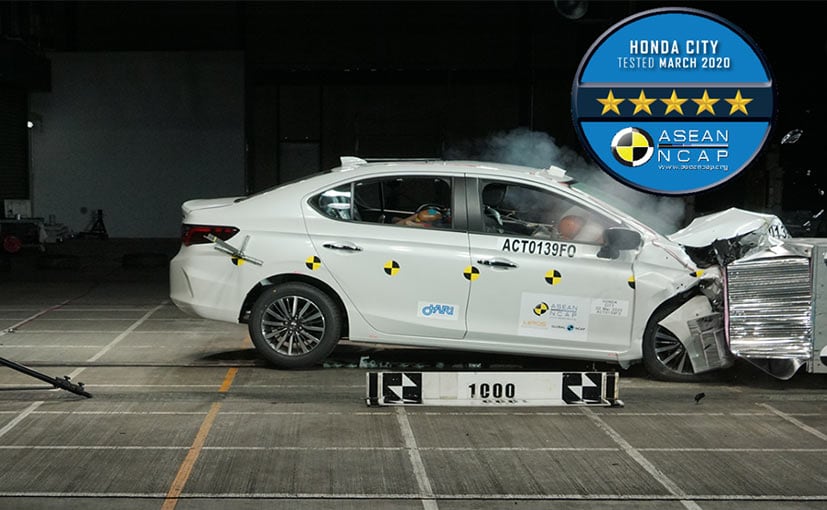 The new 2020 Honda City was scheduled to be launched in India on March 16, 2020, but due to the Coronavirus fears and keeping in mind the safety of everyone involved with the launch process of the car, the launch was postponed. As of now, we don’t have an exact date as to when the new City will be launched in India but we can now expect it to be one of the safest cars on Indian roads. This is due to the fact that the 2020 model of the Honda City has been crash-tested by ASEAN NCAP which has rewarded the sedan a full five out of five-star safety rating. However, the model tested was Thailand-spec and as a result, slightly different than the model that we will be getting in India but given that it did score so well, it won’t be wrong to have high expectations from the India-spec model as well. The Audi e-tron electric SUV and the Volkswagen T-Cross city SUV have each earned five-star safety ratings by the Australasian New Car Assessment Program (ANCAP) ahead of their arrival in local showrooms. The second-generation Nissan Juke has been given a five-star safety rating from ANCAP. “The safety of those outside the vehicle has also been considered in the design and specification of the Juke, with the front bumper providing good protection to the legs and pelvis of pedestrians, and its autonomous emergency braking function able to detect and avoid or mitigate collisions with pedestrians and cyclists across a range of speeds and scenarios,” said Rhianne Robson, ANCAP head of communications and advocacy.

“This is an important feature that buyers should be aware of, particularly since this vehicle is likely to be driven more in urban areas with high levels of pedestrian and cyclist activity.”

The new Raize is the first compact car built on Daihatsu’s DNGA platform. Daihatsu and Toyota created the platform with a goal of providing car passengers with the best driving performance, luxury, safety, and peace of mind. While many have conducted horizontal crashes and head-on collisions for testing the impact-absorbing abilities of their respective offerings, Kia in New Zealand has conducted quite a unique vertical crash test. A one-of-its-kind impact test of its own, the New Zealand division of Kia has conducted a vertical crash test, by dropping a Kia Carnival MPV from a vertical height of 12.6 metres. With the help of a crane, the vehicle was laid on a vertically flat surface which is aligned at 90 degrees from the surface below. The MPV is then dropped on the surface from the height, which falls down at a speed of 56 km/h.


One can clearly observe that the Kia Carnival has absorbed the impact pretty effectively, with the front bonnet and bumper facing the damage. The crumple zones of the MPV have absorbed most of the impact, thus resulting in minimal damage towards the rear. The airbags of the car deploy within a fraction of seconds too, and at the same time, the safety zone too takes the impact, with minimal effect reaching to the legs of the dummies inside. Daihatsu’s Rocky compact SUV has been given full marks in the latest round of JNCAP crash tests. The assessment programme has put the Rocky through a number of tests to evaluate its toughness and it has responded well with a highly appreciable five-star rating. The sub-four-metre SUV has been on sale in its home market of Japan since late 2019.

The Rocky is also the second Daihatsu model to secure five stars following the Boon. The five-seater SUV has scored high marks in the offset frontal collision as well as full wrap tests while on the side collision test conducted at 55 kmph, it has come out in flying colours with 12 out of 12 rating. As in the pedestrian leg protection, the story is no different. Car manufacturers around the world have come a long way in terms of technology and the cars that they’ve been offering. One of the important aspect that customers now have in mind while buying a car is safety. Manufacturers have a long way and are now trying hard to make their vehicles safer and are using high strength steel in the frame. Volvo is one of the manufacturer is famous for manufacturing some of the safest cars in the world. Here we have a video that shows how manufacturers have made cars a lot safer than before.


The video has been uploaded by 4Drive Time on their youtube channel. The video simply shows a crash test between old and new vehicles from same manufacturer and shows how much safer the cars that we drive these days actually are. First is a head on crash test of 1992 Nissan Tsuru and 2016 Nissan Versa sedan. The Nissan Tsuru sedan just crumbles after the impact. The A, pillar and the driver side door all just folds down like thin sheet of paper. The dummies placed inside also suffered serious damage. In Nissan Versa things were a bit more improved. The shell of the car retained its shape and the dummies kept inside also did not face much damage and the airbag also popped out in time. 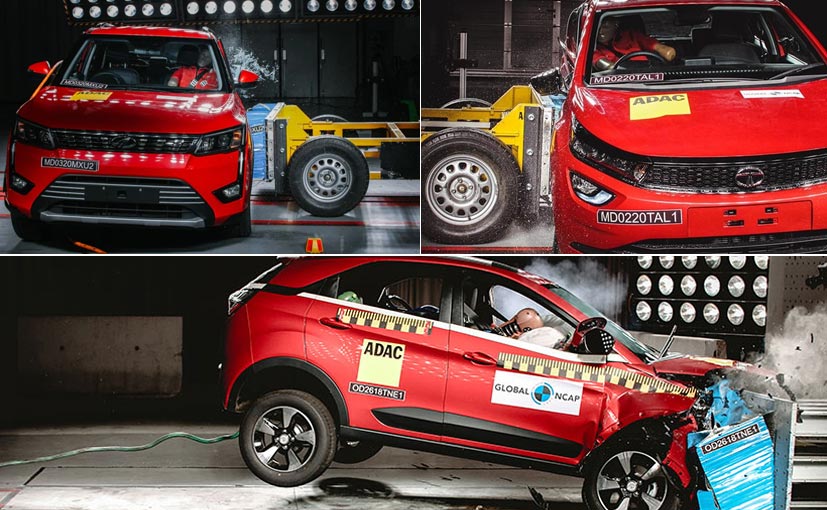 At a time when staying safe is the biggest challenge we are facing amidst the coronavirus pandemic, anything that entails safety is taken in high spirits. Road and occupant safety has been paramount for carandbike and we have always voiced our opinions louder than anyone about Safer Cars For India. This in fact, is in line with Global New Car Safety Assessment Program's (Global NCAP) cry for 'Safer Cars For India' which started back in 2014. Global NCAP has been no less than a catalyst in pursuing automakers to up the built quality and safety quotient of their models. Headlight ratings have been the downfall of many vehicles when undergoing the Insurance Institute for Highway Safety’s testing, and the latest victim is the new 2021 Kia Seltos. Despite good scores in crash testing and for its available front-crash-prevention systems, the Seltos’ scores in headlight testing make it ineligible for either of the insurance-industry-backed crash-safety advocacy organization’s awards: Top Safety Pick Plus or the lesser Top Safety Pick.