In an interview with Auto Motor und Sport, BMW CEO Norbert Reithofer confirmed plans to build an X4 crossover. The executive declined to give additional information, but the magazine says the model will measure approximately 4.65 meters (15.25 feet) long and share engines with the X3. There's no word on when the vehicle will be launched, but previous reports have indicated it could hit the market in 2014.

Now this is going to be another interesting SUV from BMW. From the sketch, it seems to be having a DNA of X6 (Both are crossovers).

And here comes the first images of the pre-production version of BMW's next crossover, the X4, which is rumoured to make its world premier at the 2013 Shanghai motor Show, slated to start on April 21.

The 'BMW Concept X4' moniker given on the pictures of the car proves the vehicle to be a concept as of now, but the huge alloy wheels, uniquely built bumpers and chrome make it look neat and aggressive.

The BMW X4 will sit below the company's famous crossover X6 and will possibly marketed as a Sports Activity Coupe (SAC) by the German auto major.

The BMW X4 is based on the latest X3 which features a sportier silhouette with a sleeker roof-line, while the front and rear of the vehicle will remind you of the F30 3-series.

Norbert Reithofer, BMW Chief Executive has said that the X4 will be a 4.65 meters long and will power a mix of tourbocharged four and six-cylinder diesel and gasoline engines, used in the X3.

It looks like a smaller version of BMW X6 with the front end of BMW 3-series.
D

The BMW X4 which will slot between the X5 and the X3 will be shown at the Detroit Motor Show in 2013 and that would be a near-production concept. 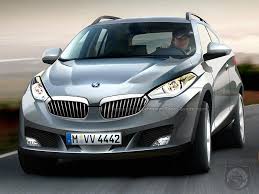 The BMW X4 is what BMW likes to call a SAC (Sports Activity Coupé). It follows on the lines of the BMW X6 – part SUV and part coupé. The X4 will almost certainly create an all new segment in between the X3 and the X5.

The X4 is based on the X3′s platform underneath. Outside, the X4 sports a lot of styling elements that relate to the Concept 4 Series such as the head and tail lights. The roofline takes inspiration from the BMW X6 meanwhile.

The Concept X4 measures in at 4.64 meters in length, while the width is 1.91 meters. The 2.8 meter wheelbase and the 1.62 meter height will ensure that this BMW is spacious on the inside.

The concept car is sitting on 21-inch wheels, something that is always changed when a car goes from the concept to the production stage.

The Concept X4 is believed to go into production from early 2014. The X4 will be built in BMW’s facility at Spartanburg in the United States that also makes other X models. Cars such as the BMW X4 will ensure the projected sales of 2.5 million SUV’s/annum by 2020 is well achievable.

Hatches + SUVs = Crossover seems the new mantra. I personally dislike vehicles which are flat from behind except proper SUVs, that also 5 seater preferred to have proper safety in case of rear end collision. But X4, X6 or Volvo V40 makes me sick man. No point in producing mix-breed.