Behind The Scenes – TAI’s Official Reviews

There’s hardly anyone who is reading this thread will not be familiar with The Automotive India’s official road test reviews. Our reviews have their own share in the industry for providing first hand information to new automobiles buyers and enthusiasts alike in as comprehensive approach as it could get. However, whatever you get to read in our reviews is only the main juice but there are a lot of things that happen behind the scenes, straight from getting a vehicle to publishing its review online. We have decided to collect and share some incidents that were part of our back-breaking task but sometimes, these moments never fail to amuse us whenever we wind back to the past.

Behind The Scenes - Mahindra Quanto Review.​
Reviewing cars while it is a great pleasure and privilege , its also a back breaking exercise with a focus to go via every tiny aspect possible of a detailed road test drive review again and again to confirm things(i must admit we also miss out on certain things sometimes due to shortage of time , these tests are always a race against time ).

Some things however stand out as amusing memories , the Quanto review especially was a time bound one with me having to return the car at 5 pm but not having done enough comparo pictures - the task was to find similar vehicles and take pictures - Usually could do it within a friend circle but no time for that - so i decided to drive around and take candid shots (with permission). A few targets were some hatchbacks/sedans and obviously against the Xylo. Started hunting for a Xylo first and after 30-40 mins of roaming around found a white Xylo - after taking a few pictures alongside realized it had a big dent upfront which will look ghastly in a comparo - so had to move on, after some time in a tight spot found another , took me 10 mins to park perfectly in the alley and just before i could start taking pictures the xylo owner took off(also wondering what i am up to) and with me standing there( grinning like an idiot)!

Finally after 2 hrs of roaming around and burning diesel(and 2 failed attempts) found a perfect match a maroon xylo against the maroon Quanto! Woke up a sleeping driver in that vehicle and requested him to oblige . Phew so much for 4-5 shots!

Behind the Scenes – Toyota Etios Liva Review​
We were surrounded by the local policemen while shooting for Toyota Etios Liva review near Buddh International Circuit in Greater Noida. They were apparently suspicious since we were unloading a sackful of scattered brochures, a medium-sized barrel along with a couple of broken tent lights and rear parcel tray (these were stuffed inside when test car was delivered to us. The car might have been on display at some mall earlier) only to take a couple of shots showing the boot space. Thankfully the cops convinced with little clarification that we’re shooting as a media and certainly have no intent to dig up a tent that noon in scorching summer of June! 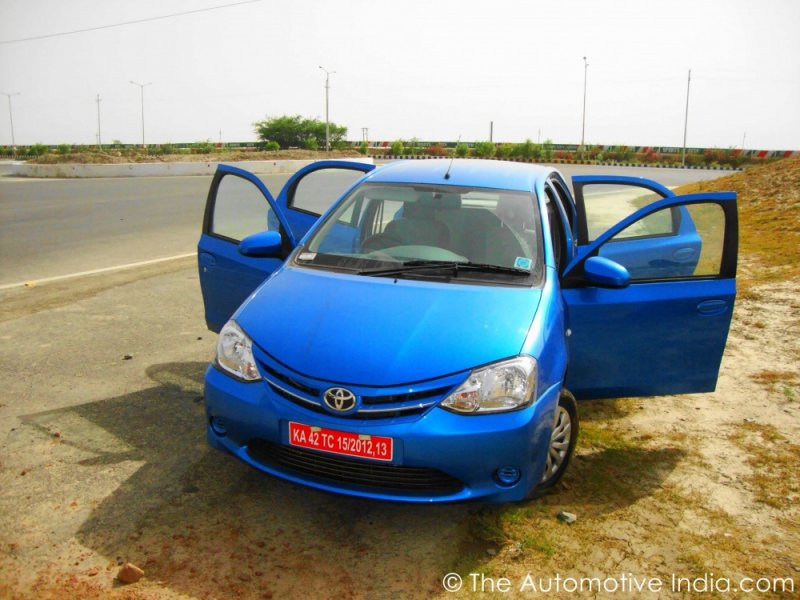 Kuddos to our team.

Appreciate the work and efforts the team puts forward to get us the best review with many issues, face up things permissions roads safety comparo and many small yet significant things which needed to make that one great official review for us.
Appreciate vibhor for this insite of what it takes for the team to go through for the reviews.Keep up the good work and good wishes as always.

I rate this thread 5 Stars.

Kudos to the effort and pains taken by TAI team on preparing the official reviews. These reviews are helpful to everyone who wants to buy a car.

Everyone jumps in to read an Official review to evaluate, judge newly released cars, but the reading experience only gets better and enjoyable due to the hard work our supreme TAI reviewers put in.
I say proudly say that TAI has really grown in the shortest span compared to any other automotive web platform and is excelling in every department of the Online Automotive industry!

It's going to be another interesting thread in our forum. Never thought it is a tough job other being unbiased. Thanks for bringing this to our notice. Kudos to our team for going through all this for an unbiased report for enthusiast.

though we have started bit late, but TAI official TD are best !!

Great Job team. We all appreciate the efforts you put in to get the best review for us. Share us some of the behind the scene photographs.

Great job Vibhor buddy and team. Thanks that you took so much pain to give us quality stuff.
Thanks again.

@Iron Rock: Any interesting 'behind the scenes' thing about the Gurkha road test? How about sharing some pictures from your personal collection?

Great job guys.Keep up the good work.Hope to see more reviews.Why not do a team test like that do on Fifth Gear.

Thanks to all for the compliments. More exciting stories coming up. We will make it a point to capture some ‘behind the scenes’ shots too in our subsequent reviews.

Among the reviews done so far, Storme was the most memorable. We did just after the launch and the frenzy was alarming!I got mobbed at places.

At the Mumbai-Pune expressway I was even waved off the road by a fellow enthusiast from another forum on a orange vista. Nice chap and very curious about the Storme.

The best was showing the Storme to a local politician an acquaintance who drives a Dicor 2.2, the conversation was in Marathi which Ill do my best to translate(though not much fun that way) :-

Him :- Cha maila tumhi pan "Shafari" ghetli ( Halalooyah you got a "Shafari" too )
Me :- Nahi Saheb testing chalu aahe, Navin Storme aahe ( No Sir, I am just testing it, its the new Storme )
Him :- Ho pudna vegli disti, ekdam rampaat - gyalala paheje! ( Yeah, Looks super butch from the front, i should buy it)
Me :- Ho Changli gaadi aahe, Dicor soda hi ghya! ( Its a good one you should replace your Dicor with this!)
Him :- Kay navin kay aahe yechayat ( Whats new with it !)
Me:- Sagla kay navin aahe, its all improved ( A lot of all improved components and interiors)
Him :- Engine shame aahe ka, kiti power ? ( Is it the same engine , same power? )
Me :- me for next 5 mins blah blah its all new variable geometry turbo, hydroform chassis ( I wish I had Xover with me then , he would have been more convincing! )
Him :- 140bhp ?
Me :- Yes

After 30 minutes of further questions and explanations :-

Him :- Vegla navin kay aahe ? (But what is new?)
Me :- I felt like killing him but politely told him that Ill send him a link to my review and he can read.
Him :- XShuveee kadli ka ? ( You sold XUV ? )
Me :- No not yet
Him :- Aikla brake nahi lagat ( I heard brakes fail !)
Me:- Ho Mhanun Storme aanli ( Yeah thats why I got the Storme!)
Him :- Majhi Audi X5 gheyacha vichar aahe ( I am thinking of buying Audi X5!)
Me :- Audi X5 ? aashi gaadi pan aahe ka ( is there such a vehicle like Audi X5? ! ).
Him :- yes fulltoo kadak gaadi aahe! Aapyla aamdar saheb gheyun yetat. ( Yes it a solid vehicle, that our govt official got it last time).
Me :- nahi aajun baghitli nahi mi Audi X5 ( No I havent seen an Audi X5 yet! )
Him :- Kay tumhi Tata Mahindra karat aastat , OODI la bagha ( Why are you after a Tata Mahindra you bugger, Check an Audi -> Get a life! ).
Me :- Ho Saheb and trying to fiddle with the phone to find an escape route from the conversation!

Two weeks later saw him in a Storme and asked him what happened to the OODI X5 ?
Him :- Order keli aahe yenar ! ( its ordered it will come!)
I decided to scramble!
Last edited: Jul 19, 2013
You must log in or register to reply here.
Share: Facebook Twitter Google+ Reddit Pinterest Tumblr WhatsApp Email Link
Top Bottom